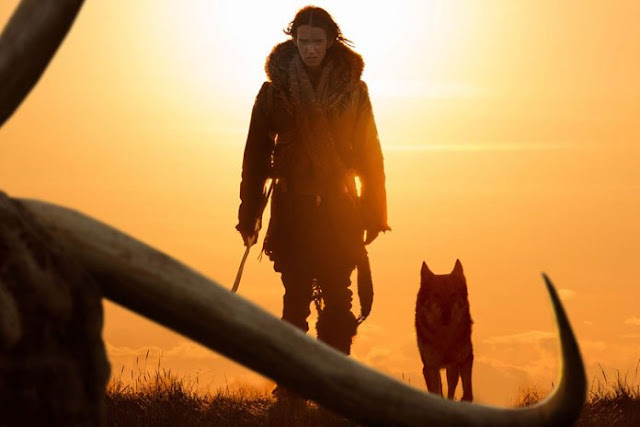 Alpha is slated to be one of Sony/Columbia Pictures' original movies for 2018. It was initially scheduled for this September and was called The Solutrean. It is set 20, 000 years ago in Upper Paleolithic era Europe (though, it wouldn't have been called that then). It is about a young teenage caveman who gets lost on a hunting expedition after he is presumed dead and then forms a relationship with a wolf. It also apparently stars Kodi Smit-McPhee (X-Men: Apocalypse, Dawn of the Planet of the Apes, Let Me In) but I did not recognize him at all as the lead in this trailer. I guess, I can credit either make-up and costume or the power of aging and growing out hair.

I really want to get excited for this movie. Any time there is a big studio production that isn't based off an established franchise, it is worth promoting and championing. But just being an original story isn't enough, it also needs to be good. I hate to say it, but this just doesn't look like a big studio movie but rather something out of an ambitious independent or a high budget TV series. I am going to assume that the date push is so that they can have more time on the post production and polish up the CGI. When we are world that gave us Jungle Book and War for the Planet of the Apes, this isn't going to cut it as a big movie event that is attempting to be taken as realistic and serious.

Speaking of being taken seriously, one of the early scenes where a cavemen is attacked by a savage animal elicited a laugh rather than fright. This the big problem with this trailer, it is coming off more as a parody of an early man move rather than the man fighting against and learning to respect nature story that it wants to be. Plus we've seen this story many times before with the survival tale in The Revenant, or hero bonding with the beast in The Good Dinosaur or even the cavemen tale in Quest for Fire. I'm not seeing anything new or interesting here, but I look forward to be proven wrong. I also thought Megan Leavey looked horribly generic and was a delightful surprise. What we need is more original movies and we need them to succeed. Though, we also need them to be actually original too.