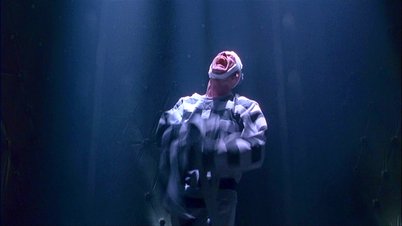 The lesson of the past two week is that wifi is no match for mountains, oceans, and big trees. I had hopes of writing more than my one throwaway piece two weekends ago, but the islands have smote me by making my connection non-existent most hours of the day. I do not have a solid history with islands, as they seem to best me (my Medeba brethren know this well).

If my connection had been better then I would have already promoted the latest writing project by my The Movie Breakdown co-host, Scott Martin, He is still putting up movie reviews over at his Movie a Day Blog (a title that sadly often is not true, but he vows to make it a reality), but he has now started up a new site detailing his daily battles with mental health and anxiety called Ramblings of a Closet Nut Bag. Crippling anxiety and now agoraphobia have been a daily part of Scott's life for the last four years, or also known as his entire time co-hosting The Movie Breakdown, so despite its emotional crush, he has found ways to be productive.

Writing about mental health and having people be open with their own personal struggles is really important. I commend those brave enough to share their personal experiences. I do not think mental health has the same stigma that it once did, but a lot of that is due to people who are willing to really explain how it effects and dictates their days and lives. This is also why I've been drawn to the very talented and funny writer Nathan Rabin, who writes about pop culture and assortment of big creative flops, but has also not shied away from sharing his own compulsive tendencies, battles with depression, and daily warfare with anxiety. It has helped me realize that I am not on an isolated island who has a complicated writing career that is a dream and provider of solace while also a constant source of mind-exploding compulsive obsessive worry and panic attack inducing anxiety.

It has been my great shame that every day my emotions bounce to high blood pressure, painful muscle tension, and chest constricting anxiety to down in the deepest gutter depression despite having joyous children and a wonderful wife. I know, I have no reason to have these emotions, and feel that I have not been able to provide my very best, despite knowing my little cherubs and long-suffering wife deserve so much better. I have the usual panic attacks over where my next client will come from and fighting the dark voices that shame me that I'm not the breadwinner in my family despite being equipped with a penis. I also freak out when the phone rings or I know someone is coming over for a visit or there is the pending doom that is a social gathering on a weekend. I've been labelled a curmudgeon, even though I actually enjoy social interactions, but my anxiety likes to trick me into believing otherwise. Since April, I had many sleepless night and battles with bouncing emotions over this family trip over knowing how hard it is to be away when I am a freelancer (no thing as vacation pay and clients tend leave if gone over a week) and also just because my emotions have made me less flexible with change. Of course, I know the trip is good for me and it has been a grand experience for my family.

I also panic daily over being revealed that I am nothing more than a hack writer trying to delude himself into believing he can create anything that people want to read. Self-doubt and lack of faith in my skills has been something I've known most of my life, yet is then contradicted by a constant need to write and have public exposure. The voices scream constantly over how can I lure in strangers and grow an audience when I know that even most of my family and friends don't even regularly read my stuff (even if there is evidence that hundred and sometimes even thousands of people have read my stuff, thus going against this hourly fear). I obsess daily over my numbers in an attempt to validate myself as someone with talent and value as a writer. Sometimes it works out well when a piece is massively popular, but other times can crash against the rocks when it is revealed that my last two podcasts The Breakdown of Box Office Flops and Breakdown of Totally '80s (two pieces that I put a lot of time and heart into) didn't end up being the hits that I had hoped or imagined. I admit that I've been depressed they did not end up being popular, though if I am honest, they have had a decent amount of listenership for shows lacking new release reviews (plus history shows when I am not posting stuff regularly that the podcast numbers do dip slightly).

Actual facts are not enough to eradicate the cloud of failure that haunts me. It strikes me with lightening that causes daily panic attacks that I often fear are actual heart attacks, and leave me the depressed evening zombie that forces me to dig into the near empty energy vessel to finish client work after the kids are in bed and leave nothing after to maintain the blog that I keep promising will have regular content (and eventually be something that I want to have a large enough audience where I can derive a source of income). I have alluded to all this in past blogs, which is why I feel redundant writing about this now, though I am not sure if I have ever actually admitted fully to this daily war.

I also don't think I have fully admitted that every extended podcast hiatus has been my doing. It has been panic that the show isn't good enough or not worthy of listeners or isn't popular, so why put the energy into it. Or other times, other parts of my career seem to be suffering, so the podcast has been the burden that needs to be released. I regret it every time, and it has never resulted in anything worthwhile. I hope it never happens again, but I never trust myself when guided by fear and self-doubt.

This is why I am thankful for the Scott Martins and Nathan Rabins of the writing world who admit daily anxiety and obsessing over their popularity are struggles that more than myself face. It reminds me the crucial importance of being honest in my own writing and forcing myself to tackle these demons by writing about them when they are at their strongest. Though to be honest, I think all this is probably boring for everyone who isn't me, but at least it provides a reason for why I am often not true to my words when I promise the content will pour flow from the rainbows like Skittles. Though as I opened this piece, a lot of these past few weeks has more to do with my current environment and inability to access the wonders of the Internet.

This is my thank you to Scott for being brave, so please check out his daily blog, and prove it is important to write about mental illness and anxiety. Maybe we can prove there is a community out there that is supporting each other, and that we can manage this nasty emotional stuff to create something beautiful and magical.
Blog Mental Health My Life Writing