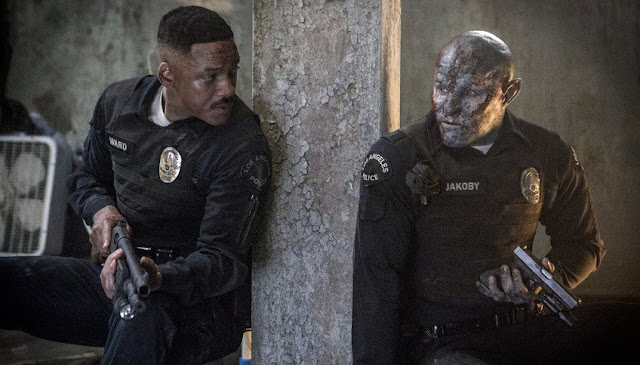 Netflix has been pumping up the David Ayer directed and Will Smith starring urban fantasy actioner, Bright, as one of the big movie events of the year. There has been a lot of anticipation about Netflix entering into the world of tentpoles, and there has been speculation on if the can outdo the studios on the one kind of movie they still are the kings.

Except can we hold up for moment, and admit that maybe one of the reasons it is coming to Netflix and not being released to theatres is due to the fact it would be a massive flop. If a big studios had this on its slate, they would probably keep pushing the release date for two years before quietly dropping it in January. I can't shake RIPD or I, Frankenstein out of my mind.

The plot is about a police officer whose partner is an orc, where in this world there are also elves, and they come across a magic wand that they must protect. Yes, they need to protect a magic wand. Sure it is a manly and tough wand, but they still call it a wand. I sense they are trying to throw in some social commentary with the orcs being a race that has prejudice against them and there is conflict with them against the police. I'm all for allegory and having a deeper message in an action movie, but I can't shake that this is a muddle of different genres and ideas getting slopped together. Magic and elves just seems at odds with gritty cop actioner.

Plus it is so dark and grimy, and doesn't look like something that would wow people on the big screen. The whole year long hype is that this is a theatre worthy tentpole that we're getting at home, but this kind of looks like a good looking pilot to a TV series. And if this didn't have Will Smith, who is one of the big remaining film stars, there is no way I'd buy this as an event movie.

I want to be wrong. I want to be able to champion a David Ayer movie again, especially after his last few have disappointed. I'm all for the bizarre and quirky, and this is definitely not afraid to be strange. So, we are a little over a month to find out if this movie can deliver, even if the trailers have been flat.