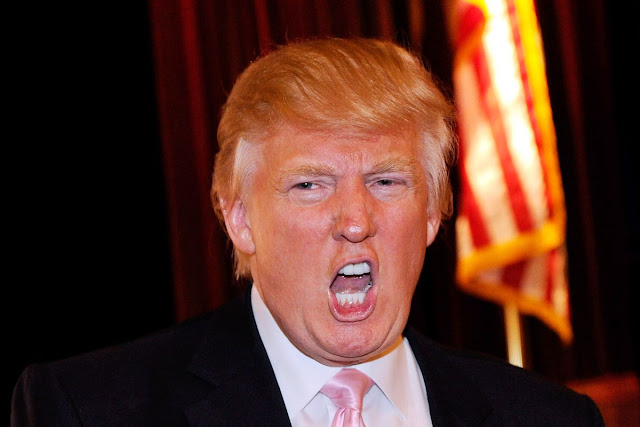 Over at Nathan Rabin's Happy Place, Rabin recently posted a piece called "On Not Feeding Into Trump's Temper Tantrums", because that is a thing that you now have to decide to do with the American President. I don't think he is saying that we live in a bubble, and it has become pretty clear that he does things that do need to be called out or be fought. The head can't be stuck in the sand, and Americans definitely needs to stay vigilante in being aware of his new policies and agendas. Even as a Canadian, I have to be aware that a lot of major things that he does will affect my country. But the point is, that also a lot of what he does is just really immature and boorish blurting and yelling. 90% of what he seems to ramble out is due to the fact no one has bothered to replace the dead batteries in his remote control truck, so he is bored now. Even though he is far less civil and well-behaved than my two year old daughter and five year old son, I've learnt with them when they get in a lousy mood due to not enough sleep, it is best to just send them off to a room to blow off their steam for a while. It is a good strategy with how to deal with the leader of the free world too. It is hard to send the President to his room, but it is easy to just ignore his Twitter account for a few hours. We can write about Trump endlessly, and this entire blog could be devoted to the inane and bully-ish things that he farts from his mouth, but life is too short and I have enough trouble with my emotions to immerse myself with Trump's public antics.

Check out Rabin's piece because it is short but has a good point, While you're there, read some of his other stuff, because he is a great pop culture writer especially if you like deep analysis in the type of silly and cheesy movies most critics prefer to ignore.
Donald Trump News Pimpage