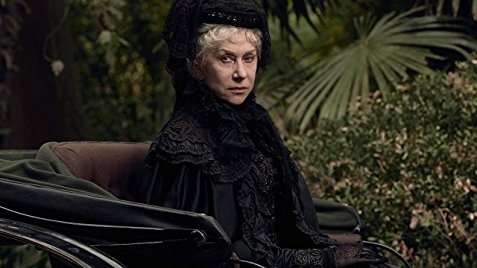 Horror stories claiming to be based on true stories have existed as far back as groups huddled around campfires with parents needing a way to scare their kids into staying inside the tent at night. Hollywood has long been fascinated with billing their horror movies as true, but in the recent years the majority of them are now verified hoaxes that were perpetuated by the infamous Warrens. But history is full of odd and yet to be explained events that would be perfectly suited for a supernatural horror tale. This is why I am rather excited by Winchester: The House That Ghost Built, because it is based on true peculiar events that have spurred a lot of speculation and ripe for being turned into a chilling Gothic ghost story.

Sarah Winchester was the widow of William Wirt Winchester and had inherited $20 million (which would be equivalent of $496,344,828 today) and had 50% holding in the Winchester Repeating Arms Company, which made her one of the wealthiest woman in the world at the time. As everyone knows, rich people are crazy. To prove that, Winchester is most known for using her fortunes for the 38 year, 24 hours and 7 days a week construction of her California mansion. The belief at the time was that Winchester feared her family was cursed and that somehow the never-ending renovations and additions to her home would keep the evil spirits away. To add to the fact that she was highly superstitious, she also was obsessed with the number 13, so her house would contain things like 13 bathrooms, 13 chandeliers, 13 window panes and so on. As you could guess with such a monstrosity, it is an odd house with many long hallways and things like staircases that lead to nowhere. It now stands as a top tourist destination in San Jose, The Winchester Mystery House.

It is such a fascinating story that seems to be begging for some creepy mythology, and I'm shocked it took this long to be turned into a movie. It is coming from the same team that is giving us Jigsaw, so after Thursday my excitement may increase or flatten. If there is any other reason to be excited for this picture other than the atmosphere and creepiness delivered in the trailer, it is Helen Mirren does a horror movie. Yep, that is frightening.