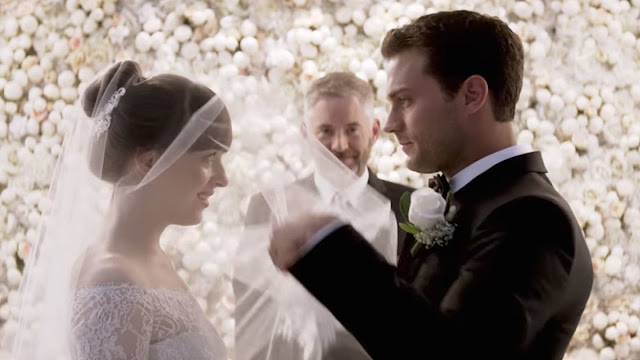 I mind as well write something about the apparent last Fifty Shades Freed trailer (even though I don't remember there being any before this one), because unless a site, paper or magazine offers me some of that sweet cash, then I have no intention of reviewing the movie come February.

Part of that is due to the fact that the people who are going to see this will see it no matter what I say, but will just see it after nasty instructions on where I should stick my foot. Actually, it might not be that bad, because it isn't a DC Comics property, and stained Thundercats t-shirt wearing guys typing away in their grandma's basement won't care if this gets a negative reaction. But I am also almost 99.9% positive that I will hate this and that I won't have much to bring to the conversation considering that I never read the books or seen the other movies.

The other part of not seeing this movie is also why I skipped the others, being a lone guy watching a movie like this at the cinema is beyond the uncomfortable threshold that I want to endure. I think my max was achieved when I went to see The Fault in Our Stars with fifty plus iPhone glued teenage girls (well, I didn't go with them rather they happened to be there when I arrived). But at least that movie was good, and Scott saw it too, so we got to discuss it on the podcast. This likely won't have any of those benefits.

But I think the trailer promises all the things that appeals to the people that have turned this into a blockbuster franchises. I saw whips and blindfolds and jets and suits and stalkers. They all have stalkers right? And Dakota Johnson gets jealous over a past love, because I think that is a recurring thing. Well, I don't think Dakota get jealous but she plays the lady who gets jealous. Plus Kim Basinger is in it, and without bothering to fact check, I am pretty sure she has been here before. It has everything the fans have been hankering.

So get excited. I'll pass. This really looks generic and dull and melodramatic, and make Adam Sandler movies seems like complex character studies. But the real good news is that Arielle Kebbel, from such hits as American Pie Presents: Band Camp, Grudge 2 and Vampires Suck, gets to play an architect or a home designer or a curtain salesperson. That is really what I was hoping out of 2018, so real happy with that.