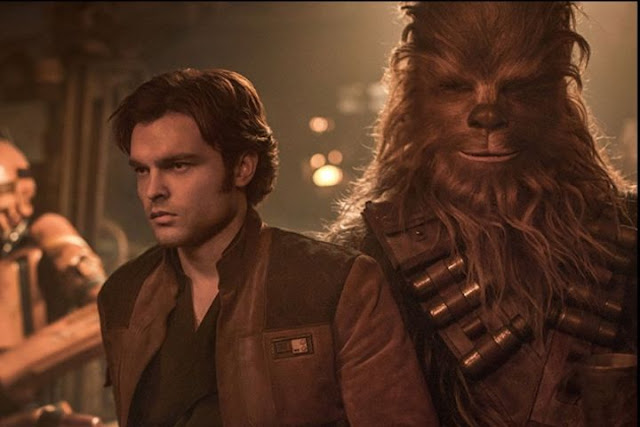 The movie website Collider has reported that Disney/Lucasfilm is putting all the A Star Wars Story anthology movies on hold. The Obi-Wan standalone had already been in production, so that is now halted and this means they've stopped moving forward with the Boba Fett standalone movie. For those that want to know the movie definition of "on hold", there is another cinematic universe that is currently "on hold" called The Dark Universe, and my guess is those series of planned films have actually been permanently scrapped. I think it is safe to say A Star Wars Story series of movies are now jettisoned to a galaxy far, far away after only two movies, Rogue One and Solo.

Disney has proven to be pretty risk averse and notoriously trigger happy when it comes to dropping stuff that doesn't look to be gobbling up hundreds of millions. Even with Solo disappointing, I was shocked they have abandoned their once labelled "anthology" Star Wars series so quickly. As someone who enjoyed both Rogue One and Solo, but has never really been that excited about continued one-off origin stories, I like that now they are putting their full energy into wrapping up the main trilogy and then shaping the new one that is being written by Rian Johnson. It also has the perk of something I did not think would happen for a long time that we actually get a year break between Star Wars movies for now and that will allow for some anticipation to actually build.

There is a reason that Incredibles 2 was a massive hit this past weekend and why Jurassic World made over two million dollars its opening weekend back in 2015 or why Force Awakens at the time became the highest grossing domestic movie of all time. In each of those cases, there had been over a decade wait since the previous movie. Studios' current strategy has been to announce sequels to a movie that has not even finished filming and try to get the series of films out as quickly as possible. They assumed fans would remain rabid for a hot franchise and demand a constant flow of movies. What has been shown is that there is diminishing returns, especially if there is very little wait between films. I think, one of the reasons the Fast and Furious franchise has remained a hit is that they haven't released a movie a year and there is at least a little bit of wait between each instalment.

Of course, studios looked at Marvel Studios, which last year released three films and will do that again this year. Marvel has also done a very good job of not making their movies feel like sequels but rather separate stories that at times are even different genres. Last year we had a space opera in Guardians of the Galaxy Vol. 2, John Hughes-ish coming of age story in Spider-Man: Homecoming, and a 70s rock infused B-movie comedic sci-fi adventure in Thor: Ragnarok. Though almost every Marvel movie has similar beats and a formula, the flavoring and style is often very different and is selling a different world and characters. The Star Wars spin-off movies did not have enough time to really establish a difference between them and the main trilogy that was distinct enough to sustain yearly excitement.

My hope is that major studios will figure out that their coveted franchises will have a longer life if they slow down the output and focus on telling compelling and unique stories. I think, it is beneficial for the Star Wars franchise to now be focused on the main trilogy series. My guess is that if someone comes up with a golden idea for a standalone movie that Disney/Lucasfilm will be open to returning to the spin-off idea, but that is how it always should have been, produce a movie when an exciting idea has been discovered rather than have a release date that you hope can be filled with a successful movie.

It looks like most studios are slowing down on their cinematic universe concept and realizing that Marvel Studios created something that is almost impossible to repeat. The Dark Universe has been shuttled off to the abyss. A Star War Story has met its end. Transformers writing room has closed down and Bumblebee may end up being the lone spin-off movie. Studios seems to have realized that names like King Arthur may be recognizable but you can't craft an entire cinematic universe around them. DC Comics has admitted slotting out several dates for movies was foolish and they are slowing down their planned output to concentrate on making currently in production movies of the highest quality. I may be being foolishly optimistic here, but most studios seems to be realizing that for the health of their big movie events that quality is more important than quantity. They are starting to take their time in making sure they can make one good movie that captures the imaginations of the movie goer rather than heavily hyping 13 movies over the next decade.

My ideal world would be the Star Wars movies go to a movie every three or four years. That way they could really focus on the stories and really build up excitement (and I wouldn't get burned out on a world that I dearly love). I realize there is no way that is happening unless one of the main Star Wars movies turns out to be a critical and box office disaster. I'm well aware that even if studios are slowing down their output that they still want their movies to come out rapid enough that the franchise remains in the conversation. It is also very likely that after a few years that Disney/Lucasfilm will try to return to a movie a year again.

Maybe now those empty A Star Wars Story slots can be replaced by those hotly anticipated Snorks and Rubik's Cube movies.