'Welcome to Marwen' Trailer Review: Zemeckis is Going to Zemeckis 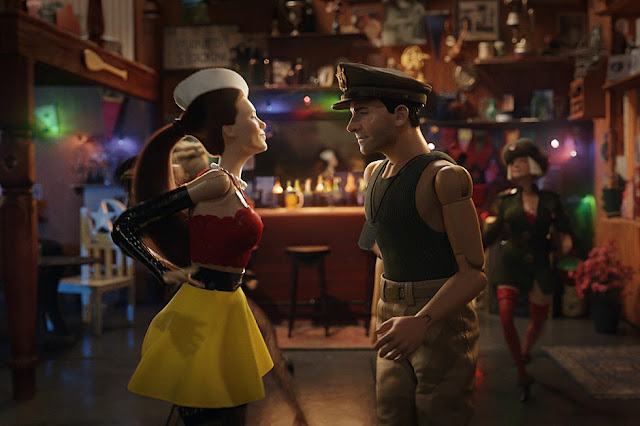 Robert Zemeckis is one of the biggest name directors of the past 40 years, and he has earned it with classics like Back to the Future and Who Framed Roger Rabbit. While he does have a diverse slate, he tend to have two types of films that he gravitates before when directing (with a few exceptions like his break-out comedy Used Cars and his romantic adventure film -- and another classic by my estimation -- Romancing the Stone) which are either movies that make use of computer special effect innovations or tug-at-the-heartstrings human interest tales that are either biopic or feel like them. He will often combine them for movies like Forrest Gump, The Walk or Flight. He also had that several year stint where he did exclusively CGI movies like The Polar Express, Beowulf, and Christmas Carol.

The last few years he has made his return to live-action movies (though each has critical scenes relying on grand special effects), but after Allied wasn't the critical (don't look at me, I loved it) or box office hit that he had hoped, he seems to be leaning heavily back into CGI innovation territory while dragging along his live-action human interest story beats too.

My sense from Zemeckis' last few movie and this one being release at the end of November, is that he is hungry for an Oscar nomination. This one stars Steve Carell who has also been hunting down a golden statuette, and a heartfelt, emotional, overcoming adversity biopic with some meaty dramatic scenes is at least what you used to need to have a strong chance for a nomination. I think, Carell's day will come real soon, but this trailer is hard for me to predict on Zemeckis' chances. Though, the eye-popping special effects that seem to seamlessly merge the fantasy world into the real world puts him at least with an outside chance at a Best Director nod if this movie does well with critics.

The American Thanksgiving release date also means Universal has hopes this is a crowd pleaser and box office draw. Though it has some big challenges with this being one of the more packed November long weekend slates with other big movies in Ralph Breaks the Internet: Wreck-It Ralph, Robin Hood, and Creed 2.

It does have an interesting story that is loosely based on real event about a guy who is almost killed in a brutal attack and as a form of therapy, creates a World War 2 era village in his yard. It is an obvious inspirational, feel-good, tearjerker about overcoming hardship that is sort of like last year's big end-of-the-year box office hit Wonder. The success of Wonder was that it was a movie that drew in families, and I am not sure how well this movie will do with families considering it has Neo-Nazis and some brutal violence (or at least, insinuated if not actually depicted). On top of that, it is hard to guess if audiences will take to the blend of real-life drama with the fantasy world of the dolls acting out adventures. Plus it may seem minor, but the name Welcome to Marwen is kind of awkward and sounds a little art housey rather than mainstream entertainment.

It is a unique idea, which makes it really appealing to me, since we have enough of the standard end-of-the-year formula award pictures. Also the pairing of Carell and Leslie Mann is extremely appealing, and the little bits in the trailer seem to show a believable chemistry. They are both recognizable faces, which I think still matters for movies like this. The biggest issue for me is if Zemeckis allows the sentimental moments to drown out the character-driven drama, but if he can balance that while balancing a tone with the crazy action figure scenes, this could be a fresh and uplifting good time at the theatres.

I was a fan of Zemickis' Flight and a very big fan of Allied, so the director is on a roll for me. At the very least, it should stand out as something different from all the other Oscar contenders.