Bruce Willis Shoves the 30 Year Christmas Debate Off a Tower 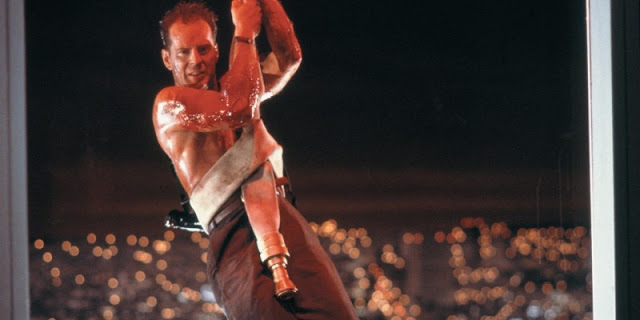 Die Hard just turned 30. The majority of movie fans can agree it is one of the all-time classic action movies. Where there is a bit more debate is if you can consider it a Christmas movie. I am sure the longstanding argument that it is a Christmas movie first came from a group of people just wanting to be contrarian and subversive by choosing a violent action that is set during Christmas time as a holiday movie rather than any real belief it should sit alongside Miracle on 34th Street, Scrooge, or It's a Wonderful Life.

If someone wants to make it a Christmas Eve tradition to watch Die Hard every year, then that is one cool family to me. I actually do think that Die Hard has enough themes and story elements to be considered a holiday movie. After all, it is about a man who is sacrificing everything to be with his family, which is something quite common in many classic Christmas movies. It at least has as many Christmas elements as Home Alone.

But this week, the 'Die Hard is a Christmas movie' was dealt a solid blow. During the Comedy Central Roast of Bruce Willis, he spoke a few words after the onslaught of mocking for Hudson Hawk, having the reputation of being ass, and doing the same movie over and over. Some of the words he chose where exactly, "Die Hard is not a Christmas movie. It is a god damn Bruce Willis movie." Not sure why it can't be both, but obviously it hasn't just been grandmas and store Santas that get annoyed when fans try to pass the classic off as a Christmas movie. Clearly, he needed his voice to be heard, and as the star of the movie, I'd say it is a pretty strong vote for it not being considered a Christmas movie. If that wasn't enough, he solidified it with a harmonica solos, because nothing says truth like the music from a harmonica.