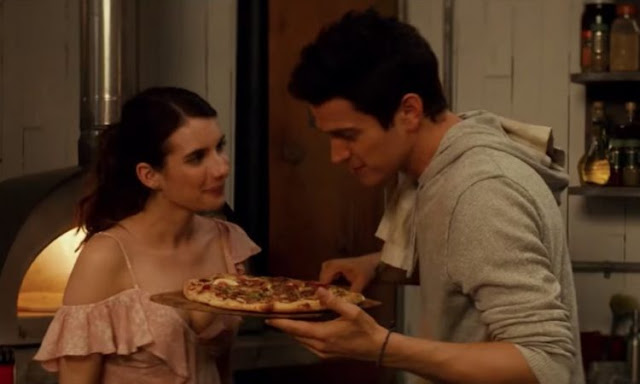 While watching Little Italy, I couldn't shake the feeling that director Donald Petrie (Miss Congeniality, How to Lose a Guy in 10 Days) and screenwriters Steve Galluccio and Vinay Virmani (Breakaway) had binge watched all the significant romantic comedies of the past 40 years, and then challenged themselves to make a movie that contained as many scenes, tropes, and clichés as possible from the genre.

I am sure I am going to miss a few here but this latest romantic comedy contains pointless voice-over narration to bookend the movie, starts with the romantic leads as children with one clueless that the other has a crush on them, their fathers now hate each other after some mysterious disagreement, one lead leaves home but as circumstances would have it must return where they find their former crush still lives there, a side-plot of the two single grandparents of the warring families falling in love, a few wacky minority sidekicks, an easy to solve misunderstanding that causes conflict in the main romance, a final contest between the two leads where one allows the other to win, a lead must chase down the other in an airport to confess their true feelings, and of course, the female's established lifelong dream doesn't matter compared to finding true love.

Emma Roberts (Nerve, We're the Millers) and Hayden Christensen (Star Wars Episode II: Attack of the Clones, Star Wars Episode III: Revenge of the Sith) are the childhood friends turned romantic leads. Roberts is Nikki who is a recent culinary graduate with an offer of a lifetime to create the menu for a new gourmet restaurant being opened by her teacher Corrine (played by Jane Seymour - Dr. Quinn Medicine Women), but has to head back to Canada to get a work visa sorted out. Despite the offer to be the head chef of a gourmet restaurant if her menu is chosen (she is competing with another), this major task is only referenced a few times after the movie's opening, as if it was all just a thrown together excuse so she could reunite with the grown-up version of her childhood crush, Leo (Christensen). What could have been an interesting side story that enhances the Nikki character gets shoved aside to focus on worn-out "will they or won't they" contrivances.

It is unfortunate because Roberts and Christensen have a comfortable chemistry together where they play off each naturally and feel like long-time friends with some simmering romantic feelings. It is gets undone with clunk-off-the-head dialogue, cheesier than a stuffed crust jokes, and constant forced obstacles to complicate the would-be romance (a women appears for one scene at Leo's apartment right when Nikki is going to confess her feelings, the pair get thrown into their family squabble after both already agreed it was foolish, blow-ups over misspoken words). The leads have enough charm so that you do convince yourself that you want to see them together, but they have a monumental struggle trying to overcome a stale script.

A standard formula romantic comedy isn't a death blow during a time where they've become rare on the big screen, but this fails to take advantage of the elements that would help elevate the movie. It is set in Toronto's Little Italy but very little is done with the location to feel distinct besides characters occasionally yelling in Italian at each other or their being two competing pizzerias (so tired stereotypes). Even though Nikki is a gourmet chef and most of the movie takes place at the pizza joints, there is no scene to immerse you into the cooking or feeling the supposed passion these characters have for making food. Instead, we get some extended scenes of two characters raving about Starbucks' flavoured coffees to the point that I suspect the franchise may have covered some significant costs in the production. When it comes to immersing you into the culture and character's passions, this isn't in the league of a Crazy Rich Asians or Chef.

The positive is that the cast does seem to be having fun, and sometimes that can be enough to make a movie enjoyable. It is great to see Danny Aiello (Do the Right Thing, The Professional) and Andrea Martin (My Big Fat Greek Wedding) together and they have a few charming moments. Alyssa Milano (Charmed, Who's the Boss) getting work is a great thing and she brings her usual strong screen presence, but it would be even greater if she had something to do. Roberts and Christensen are a strong enough pairing that I'd love to see them in a better movie.

Romantic comedies have been making a comeback in 2018 with cheerful and energetic movies like Love, Simon, Set It Up, and Crazy Rich Asians. All those films proved you can follow the usual romance movie beats but still deliver something fun and lively if you have believable characters and settings that are engaging. Little Italy ends up being a misfire because it failed to add any fresh ingredient to the genre's recipe.
Emma Roberts Hayden Christensen Little Italy Movies Review