Another Follow-Up to This Week's 'The Movie Breakdown' 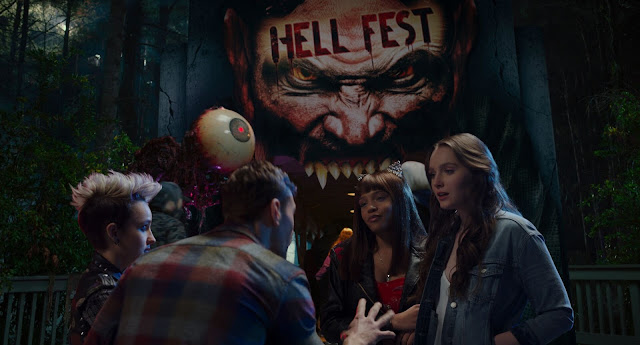 During my Hell Fest review, I mentioned that while trying to stay awake that I started thinking about how odd there was no other patrons, security or staff in the haunted houses other than the six leads and the killer. I should clarify that I am well aware there was security at the park in the movie. There are a few scenes where a particular security guy tells the characters he can't arrest people for doing their job. At one point security even does try to arrest the killer, though that scene has a whole different issue.

My criticism was only on there not being much staffing inside the attractions. You'd think that such a popular park and one that had a legit history of a girl being murdered inside one of the haunted houses a few years ago, would have way more security or staff inside to make sure things remain safe.

I know most legit haunted houses have staff in every room and for things like Wonderland, there would be some security around. As far as I know, no one has been murdered at Wonderland Halloween Haunt, yet this movie established right away that this park has had a real murder a few years ago. You'd think it would be good PR to do your best to prevent that kind of thing going forward.

I should also confirm that the lack of security is not the reason that I only have the movie at one and a half stars out of four. The horrible dialogue, paper thin characters, lack of tension, lack of real scares and long stretches of dullness would be the reason.

I think that is now way more than enough talk about Hell Fest. I plan on not mentioning it again except maybe for one particular annual year end show we do.
Breakdown Correcting an Error Hell Fest Movies