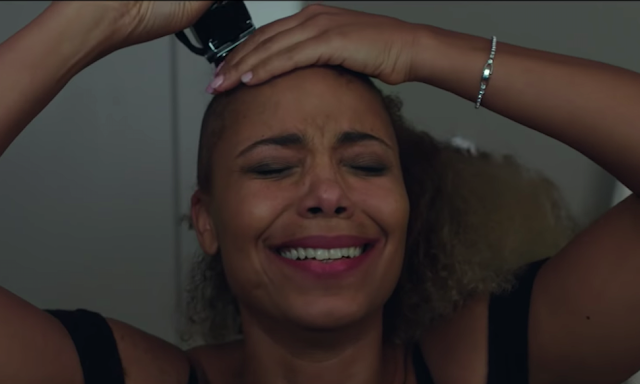 If you have listened to this morning's The Movie Breakdown, then you know that Scott and I did not recommend the (sort of) romantic comedy Nappily Ever After. We both gave it two and half stars out of four so that is a 'passing grade' but we both see three stars and above as our official recommendation (borrowed from Siskel & Ebert who saw a thumbs up as a three star and above movie).

I mentioned that it has a really important message (not letting society dictate your appearance and have physical pride in your race) and Sanaa Lathan is a great lead, but both get drowned out by meandering subplots and a really weak romance storyline (that I never figure out if it was supposed to be the central storyline or part of a bigger story of her finding herself).

The rather important thing that I forgot to mention is that through all its messiness, I did see a very talented and ambitious director in Haifaa Al-Mansour. As Scott noted, she broke into filmmaking with the major film festival winner Wadjda, which is a significant movie because it was the first movie entirely shot in Saudi Arabia and more importantly, the first feature directed by a Saudi Arabian female. It is to my great shame that despite it coming to North America in 2013 that I still haven't seen it.

Nappily Ever After shows signs of a bold and confident filmmaker that has a few scenes where the directing conveys great emotion just through imagery such as when Lathan's Violet shaves her head. The movies biggest problem is that it tries to tackle too many issues and subplots where none get enough time to really leave an impact. I am not sure if this was due to trying to be too faithful of an adaptation of Trish R. Thomas' novel of the same name or just Adam Brooks' and Cee Marcellus' script needing some streamlining.

The comedy in the movie also almost never works. The movie would have been much stronger if it was more dramatic and avoided the broad comedic take on characters like the mother. At this stage, Al-Mansour seems stronger telling serious stories with strong social themes with little bits of wit and light comedic touches. Though to be fair to her, most directors over the last few years seems to have missed the mark on broad slapstick comedy.

What I failed to say on the show and I think is really worth mentioning that even if I am not recommending Nappily Ever After that it was strong enough to get me very interested in seeing what Al-Mansour has next. Her next movie returns to Saudi Arabia with a movie called The Perfect Candidate, but there doesn't seem to be a lot of information available for it. I am really excited to see her grow as a filmmaker and will eagerly look forward to anything she puts out in the future.

She is a filmmaker that has a lot to say. Her future movies could really add to the conversations about women rights, societal perceptions of women and the pressures culture has on gender. Of course, I am open to her tackling any other topic or themes, but she feels like a filmmaker that really wants to tell female empowerment stories.

My last six years writing about movies has taught me that I can find a lot of good and value even if a movie doesn't entirely work (or even those that turn out to be giant stink bombs). It is my job to see talent and creativity and value in movies even those that can be at times a chore to watch. I do think Nappily Ever After is worth checking out even if I do not fully recommend it, but I really do think Haifa A-Mansour has an exciting future in movies.
Haifaa Al-Mansour Movies Musings Nappily Ever After The Movie Breakdown