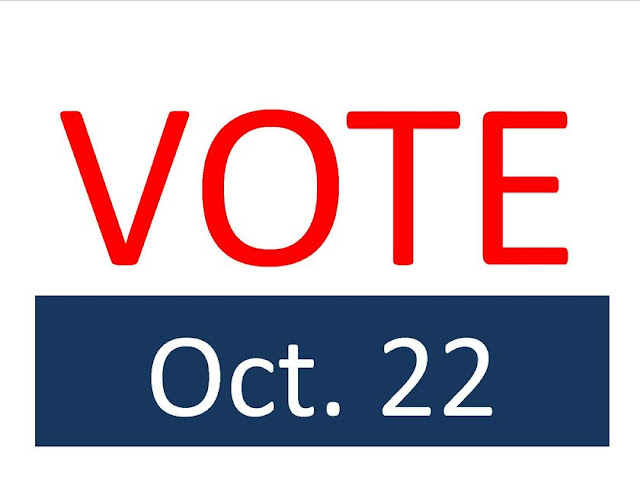 If you are residing from Ontario and reading this on October 22, 2018, then I hope you plan or have already done informed voting. I realize the municipal elections are the least glamorous and under reported, but they are actually the most important. These are the elections that directly affect your community and will impact your day to day life. This is also the one you have the most voice for change as it involves your actual city. Sadly, it is also the one with the worst voter turnout and many people seem to miss its relevance and worth.

You may also notice that I have used the word 'informed' a few times. If you don't want to take the time to learn about the candidates and form an actual opinion then you're missing the value and point of voting. Please take some time to watch a debate or quickly look at the platforms to learn about your candidates. Use that knowledge to decide who you support to lead your city forward.

I already voted online this morning. That is right, at least in Brantford you don't even have to leave the house and you can use this thing called the Internet to cast your vote. Your excuse for not voting has diminished even further.

My vote was cast for change. I voted for a new mayor and two new members of council. You may think your city is great as it is, and go for the re-election route. Either way, please take some time to learn about your candidates and then cast your vote.

I also want to add that I did watch both the my ward's council debate and the mayoral debate, and it was nice to see that almost every candidate talked about the importance of diversity and acceptance, and put a big focus on how arts and culture are the life blood of a city. It gave me a whiff of hope that I can have some faith in politics again, and at least in Brantford, we aren't being driven by bigotry and a fear of the 'other.' While taxes was talked about a lot, each one focused more on proper use of taxes rather than just cutting them. The municipal level seems more progressive and open-minded then some of bile we've had to endure at the other recent elections.

Enough of my soapbox, you have some voting to do. Or if you already voted, have yourself an "I voted' congratulatory drink.
Brantford Municipal Election 2018 Musings News