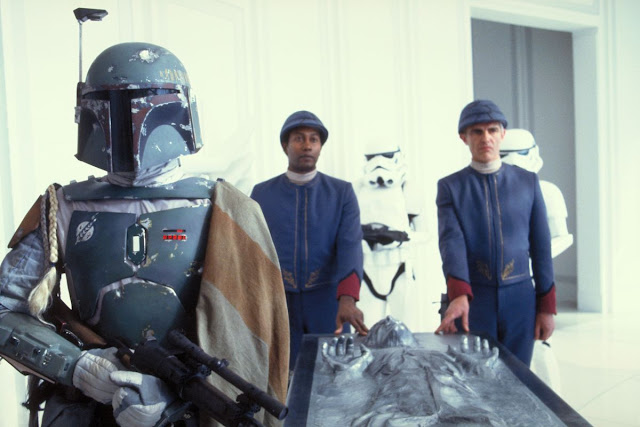 It looks like those Star Wars spin-off may be dead after all. Shortly, after Solo: A Star Wars Story underperformed it was reported they were scrapping all the non-episode movies. Disney denied it being true and said they were still focused on all the projects they greenlit. The word on the street is that Kathleen Kennedy is declaring the Boba Fett movie is dead, and if a big name like that isn't getting a movie then I think it is safe to say A Star Wars Story experiment is done or at least, going on a long hiatus.

As I said back in June, this is a great thing. Episode 9 has a year and half to build anticipation and feel like a big deal and be the primary movie focus of Lucasfilm. This mean whatever follow-up they have for that movie, be it an Episode 10 or a new trilogy set in that world, there should be at least two years for Star Wars fans to build excitement. There are a reasons that Force Awakens, Jurassic World, Incredibles 2 and maybe even Jumanji: Welcome to the Jungle were massive smash hits, because there was a long wait since the previous movie and it helped make them into big events.

The studio strategy is to try to strike when the iron is hot and try to get the next instalment out as quickly as possible. It has worked for the Marvel Cinematic Extended Universe, but they also have the advantage of each movie containing different characters and often even have a different style. You may have three Marvel movies in a year but one is about Guardians of the Galaxy and another may have Thor and then another will be Spider-Man, so the feeling of freshness remains. If you get a Jurassic World movie every year or non-stop assembly line of Terminators than audience excitement for them will plummet.

It seems like studios may be catching up on that a bit. Wonder Woman 1984 got moved out of its schedule spot in 2019 and is now a 2020 summer release. That now means that it will be a three year wait before the follow-up to the original Wonder Woman. That is the same amount of time that the original Star Wars trilogy had, and seems like enough time for people to start salivating for the next story again.

Except for the very successful MCEU, it looks like the other studios have got cinematic universes out of their system and no longer have aspiration of two or more interlocking movies a year that will eventually lead to a money-raining-down-from-the-heavens team-up event. One studio has had success with it and evidence points to audiences not really being excited about that happening with anyone else. After the disappointment of Justice League (which to be fair, they really rushed their team-up movie and botched the build  to it), DC now just seems to be focusing on each individual movie and as Wonder Woman proves, even willing to take their time to get it right.

Even if Dark Universe or a Hasbro Shared Universe is still a thing that studios want, it is clear that they are no longer over-confident in the formula being an automatic gold factory and are now taking their time on releasing their movie. We are more likely to see a Bride of Frankenstein or Transformers reboot that is focused on that specific story rather than building towards fifty five spin-offs and a sequel. There likely will be a wait and see approach before production starts on the other movies. We may see actual constraint from studios and a focus on making each movie something their audience wants to see rather than feature-length ads and set ups for the next year.

This doesn't mean a flood of greatness is going to consume us. This model still brings stuff like Venom and Jurassic World: Fallen Kingdom, and I haven't liked many Fast and Furious movies despite all of them have a few years space between them. A few year break between sequels doesn't automatically make magic, but it at least should give filmmakers a chance to focus on that specific movie.

Of course, the movie industry is always shifting and every studio is trying to find the best strategy to maximize profits and bring an army of movie-goers to see their latest. Maybe in two weeks, every studio will unveil their latest cinematic universe or we will learn about a series of films that will accumulate with the Terminator, Robocop and Rambo battling the Goonies.

For now, I have some hope that studios are at least learning the value of having a little bit of anticipation.
Boba Fett Movies Musings News Star Wars