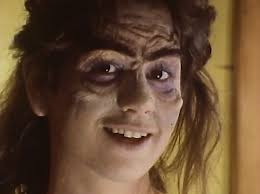 The Soultangler is a 'do it yourself'' style gory horror picture drawing inspiration from stories by H. P. Lovecraft as well as movies about zombies, mad scientists and possessions. It was shot in 1985 by mostly family and friends in Long Island, New York on a meagre budget of $8,000. It's a homemade production by an unseasoned cast and crew driven by passions for splatter and supernatural movies that were very popular at the underground level in the 1980s.

It took until 1987 for the movie to land a home video distributor, an Italian company, that liked the 62 minute cut but felt it needed to be 90 minutes to make it sellable.  Director Pat Bishow ended up adding 30 minutes of 'padding' with expository dialogue explaining the mythology and long scenes of people walking or driving or smoking (it also works as a cigarette ad).. The company then ended up never giving it an official American release, but it was distributed in several other countries including Canada (which is how my podcast co-host, Scott Martin, was able to obtain a VHS copy in the early 2000s).

It has mostly sat in obscurity until this year when the American Genre Film Archive along with BleedingSkull.com restored the film for a special DVD release. Both organizations focus on the restoration, collection, conservation and distribution of genre cinema, and no matter your opinion on a specific movie, each is a piece of art and history that should be preserved. The DVD also marked the first time Bishow could release his original 62 minute cut.

Bishow freely admits on his commentary track that The Soultangler is not a very good movie. The main story is rather derivative to the point that some have accused it of being heavily inspired by Stuart Gordon's cult classic, Re-Animators, but Director Pat Bishow claims this was just a coincidence as filming happened before that movie's release. It also clearly is made by non-professionals with barely community theatre acting, borderline incoherent plotting, clunky attempts at humour, hastily edited sequences, and a plodding pace (especially if you watch the version released in 1987).

What it lacks in polish, it soars with tons of charm and is clearly crafted by people who love horror and cinema. Bishow makes some bold decisions that dip the movie into the bizarre like a dinner scene where the dialogue floats around while non-talking actors have dinner and several hallucination sequences that must resemble a LSD trip.

The real stand-out of the movie is the fun practical gore effects made by George Higham that are not realistic but fit with the zany atmosphere and tone of the picture. The blood actually looks authentic even though squirts out like an overstuffed jelly doughnut. Fans of 1980s gorefests will see some great stuff including a crazy decapitation that looks as good as any other surreal and zany schlock from the time period.

The story follows reporter Kim Castle (Julie Kinser) who starts investigating an eccentric scientist, Dr. Anton Lupesky (Pierre Deveaux who was Bishow's brother-in-law).after a series of women have gone missing (and a few boyfriends left lying around with hammered in heads). We learn Lupesky is a madman who has created a serum called Anphorium that allows the user to transcend reality and inhabit the body of a corpse by entering through the eyes (the windows to our souls, of course). Instead of grave robbing, he decides for much fresher dead bodies.

One doesn't watch a movie like this for the story or characters. The Soultangler's best moments are when it goes completely wacky with stuff like a zombie using his own intestine to choke a guy and a slithering brain with eyeballs. The movie lacks traditional horror staples like scares or tension, but it delivers a few gloriously gory moments.

Unfortunately, the best stuff is spaced out with long stretches of verbal diarrhea and supposed character development. It has a few improvised scenes that give off a school play feel (part of its charm), but adds to the meandering nature of the narrative. I can see this being fun for lovers of the extremely campy and cheap schlock horror, but it is best saved for watching in groups who can joke around until the good bits.

I am glad that I got to experience this movie and the DVD commentary really shows how much affection and love Bishow has for the genre. I am happy this movie has been discovered and restored, but I will be just as happy to never watch it again.
Horror Movies Review The Soultangler