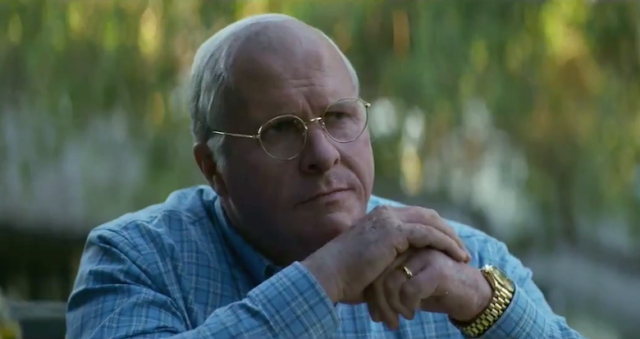 It was a bit of a shocker when Adam McKay, best known for directing comedies like Anchorman: The Legend of Ron Burgundy, Talladega Night: The Ballad of Ricky Bobby, Step Brothers, and The Other Guys, served up a thoughtful and biting political and social dramedy in The Big Short. His previous comedies where smarter and savvier than many other comedies and were some of the best of the Will Ferrell straight comedies, but nothing from them indicated McKay had a bona fide Oscar contender up his sleeves. The Big Short was a big player during 2015/2016 awards season including winning a Best Adapted Screenplay by McKay and Charles Randolph.

If this trailer is a reflection of the McKay's latest, Vice, then he may have an even bigger Oscar success coming his way. McKay is someone who cares about politics and has a lot of rage about how some events from the past have caused some of the messes that were are in now. Vice looks to be another heavily political and social dramedy that aims to be a crowd-pleaser that makes the message go down easier.

This looks to have style and lots of energy with tons of witty and nuanced humour. But the real stand outs to me are Christian Bale and Sam Rockwell. The make-up and costumes are fantastic, but even without that, both really nail the quirks, mannerisms, and tics of their subject. The conversation between Bale's Dick Cheney and Rockwell's George W. Bush feels like exactly how it would have gone down.

Vice should be bizarre and wacky, but that fits with all the horror stories we heard about Cheney. McKay proved he had the goods in The Big Short, but this may turn out to be his masterpiece. I believe Vice missed all the festivals so it looks like it may take on the awards season by storm despite missing the usual buzz around it. I really hope this one makes the January roll out to Brantford, and if it ends up nabbing all the actor nominations like I expect, I am sure it will.