Who is the New 'Robin Hood' for? 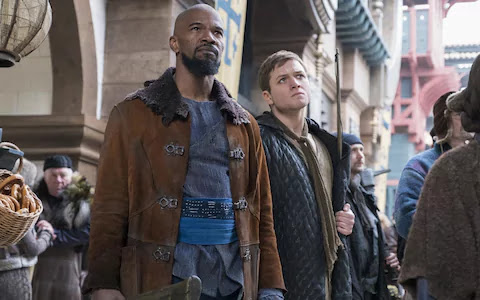 It was a few years ago that Scott and I talked about how almost every major studios had its eyes on a version of a Robin Hood movie. We thought it was little bit of 'recognizable name' insanity where studios were thinking that just because people had heard of Robin Hood that they would come in droves to see another movie about him.

I think it may have been Sony that bought up a pitch that was going to give each of Robin's Merry Men (and Maid Marian) a stand-alone movie that would eventually turn into a massive Avengers-like team-up. We spent most of our time discussing how this plan was like just throwing hundred millions of dollars into a blender.

At the time of the discussion, 2010 wasn't that long ago where Ridley Scott directed and Russell Crowe starred in a Robin Hood that seemed to sneak in and out of theatres to the point that maybe the excited executives forgot we just had a movie about the robber of the rich. Maybe this movies was a thing that nobody really cared about (okay, it was apparently the 26th highest grossing movie of 2010 so not a total bomb, but did you remember it? If so, is it fondly?).

I haven't heard much of the big Robin Hood bonanzas since we discussed the plans, except for Lionsgate who has their Robin Hood movie set for the American Thanksgiving weekend (one of the traditionally biggest box office weekends of the year). At one time this was called Robin Hood: Origins, which was a neon sign of what their plans were initially going forward. Then King Arthur: Legend of the Sword (a planned first movie of a six movie series) bombed at the box office and you could almost hear the air rushing out of the Lionsgate executive lungs.

Now, it is just called Robin Hood and the marketing has felt a little like "let us get this over with as quickly as possible.' Lionsgate hasn't boasted it has a big mega-franchise anymore and probably is just hoping they don't get Gods of Egypted.

Up until now, most of the trailers have been hyping a gritty reboot of the classic story. A movie with big explosions but a more grounded and tougher Robin Hood. It was a movie promising an edge. Now, the latest trailer had arrived and it looks like it is an action comedy with the tongue firmly in cheek. This looks like a goof that is knowingly playing around with the tropes of the genre.

So, I am left asking what is this movie's actual tone? Is it the gritty reboot or the fun romp? My guess, is that executives got nervous with how the movie was tracking and changed gears on the marketing to hope this approach will generate some buzz. But the mystery is if the marketing has been misleading up until now or have they just started lying about the movie?

No matter what this movie ends up being, I am sticking with my stance from a few years ago. Who in the world wants another Robin Hood movie?