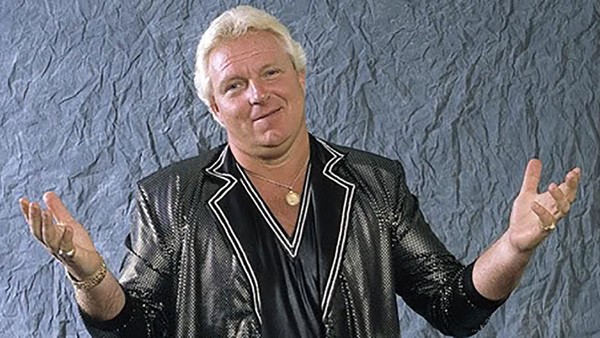 Yesterday, I inexplicably turned a post about Hugh Jackman's recent announcement into one focused on wrestling, so it seems about the right time to finally write a piece that I've needed to do for over a year. A tribute to one of the all-time wrestling greats, Bobby 'The Brain' Heenan.

I would easily rank Bobby 'The Brain' Heenan as one of the top ten most significant figures in 1980s WWF wrestling. He was the top manager who was often in the corner of the headlining heel, he was a hilarious commentator with an amazing chemistry with co-announcer Gorilla Monsoon, and even occasionally wrestled in some of the more prominent matches.

When I first started watching wrestling back in late 1987, I was afraid of Heenan. The main reasons were likely that he managed some of the more intimidating wrestlers in monsters King Kong Bundy and Andre Giant, he constantly insulted the fans by calling us humanoids or ham n' eggers and tried to push around interviewers like Mean Gene Okerlund and Craig DeGeorge. I was too young at the time to appreciate Heenan's great slapstick skills and his incredible comic timing, but also his ability to really enhance the act of all his wrestlers. 'The King' Harley Race, 'Ravishing' Rick Rude and the Brainbusters were great wrestlers and characters, but Heenan accompanying them took them to the next level.

The longer I watched wrestling and the older that I got, I really started appreciating the genius of Heenan. He was great as part of a comic duo with Okerlund or Monsoon, where he'd berate them or try to make himself look better, but often end up being the punchline at the end. He often had the persona of a guy who talked tough and thought he was better than everyone else, and so it made it more satisfying when the face beat him up or he ran away like a coward. While he was very charismatic and a great interview, he always knew that the focus should be on the wrestlers and he enhanced rather than upstaged the guys he managed. He also was very sly at making his insults and dress-downs of his enemies framed in a way that made them look better and made you salivate for the moment they'd get their revenge.

He was involved in some of the most famous moments in WWF history. The biggest actually happened right before I got into wrestling but I've now seen several times, which was the famous Piper's Pit where Andre the Giant turned heel by challenging Hulk Hogan for the WWF World Heavyweight title at Wrestlemania 3 while also aligning with his one-time enemy, Heenan. The good guys blamed Heenan for poisoning the mind of Andre and making him jealous of the champ. It is still one of the greatest angles ever conceived and was the reason why Wrestlemania 3 is still considered one of the biggest and greatest wrestling events ever.

Other major Bobby Heenan moments included when he couldn't stop insulting The Big Boss Man's mom, which then lead to him being handcuffed to the railing at ringside for the remainder of the show. An entire feud constructed from mom jokes in theory is really stupid, but Heenan's acting while be stuck at ringside was one of the great comedy moments.

Heenan had a habit of insulting, as another big moment was when for months he would berate one of his wrestlers, The Red Rooster, for not being good enough until one day the poultry-inspired wrestler had enough and turned on him. Heenan then declared that he could turn any loser into a winner, and transformed long time jobber Steve Lombardi into tough street fighter, The Brooklyn Brawler, whose character debuted by sneak attacking the Rooster after Heenan provided the distraction by pretending to apologize for abusing him in the past.

During Heenan's run, the WWF was mostly a live-action cartoon with many silly storylines but Heenan made dognapping Matilda from the British Bulldogs or having a coronation to make a wrestler a king or trying to sell a wrestler into slavery (the wrestler was white) all entertaining because he made you believe and his charisma made the moments memorable.

He also had a few running gags like in 1987 where he wore a neck brace for most of the year saying the top face did serious damage and his colleague Monsoon kept accusing him of goldbricking. Heenan would then get all upset and then suddenly remember he is supposed to have a bad neck.

The thing that Monsoon teased Heenan the most about was the inability to get any of his men to win championships. That all changed in 1989 at Wrestlemania 5 when Heenan cheated to help Ravishing Rick Rude win the Intercontinental Championship from the then undefeated The Ultimate Warrior. A few months later, his Brainbusters broke Demolitions' year and half WWF World Tag Titles reign by winning the titles (by cheating again, of course) on a summer episode of Saturday Night's Main Event. Heenan then for the next several months wouldn't stop bragging about his accomplishments.

Heenan then would go on to manage two more champions in the WWF by leading  the Colossal Connection (Andre the Giant and Haku) to the WWF World Tag Team Titles at the end of 1989.and Mr. Perfect Curt Hennig to the Intercontinental Title in May 1990 (and again at the end of 1990). Heenan always did a great job at making his title wins feel like huge deals. Though he never led a guy to the WWF World Title despite being the main manager who sent monsters and heels after Hulk Hogan for several years.

Bobby 'The Brain' Heenan was a legend. He was a colourful personality that knew how to entertain crowds but was never selfish and used his act to make others look good. I've read that many felt he had the charm and wit to have been a great sitcom star or the comic relief in a major movie, but I'm glad he gave me so many years of entertainment in professional wrestling. He was an all-time great and one of my favourite wrestling personalities ever.