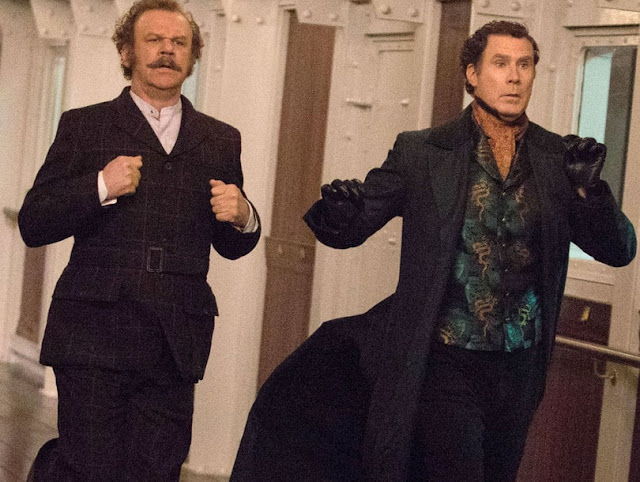 How bad does a studio's movie have to be if Netflix doesn't even want to buy it off them? Apparently, Holmes and Watson bad. Netflix has happily dropped money on studio rejects like Spectral, Step Sisters, Mowgli, Extinction, and Cloverfield Paradox. I haven't recommended a single Netflix Original that was initially supposed to be released theatrically by another studio, and most of them have turned out to be borderline awful. Every time Netflix must have been aware they had something no one would want to spend money to see on the big screen, but tried to pass off as a big event on their streaming service.

Yet a movie starring big names in Will Ferrell and John C. Reilly who play recognizable characters was considered not worth blowing money on. I actually believed until today that Netflix would buy anything that was up for sale if they could slap the Netflix Original label on it. Even Netflix has standards, but their rejection point would have to below such gems as The Ridiculous Six and The Open House. The Etan Cohen directed Holmes and Watson did have a 42 million dollar price tag, and that may have been the reason that both Sony wanted to unload it and Netflix balked on the offer. Though during the time they announced the Adam Sandler movie deal, Netflix promised he would be getting the same budget that he had for his theatrical releases that often would be almost double the budget of Holmes and Watson.

Apparently, Sony got anxious after the test screenings got a very poor audience response. You'd also think audience dissatisfaction was a reason The Cloverfield Paradox or Spectral landed on Netflix's lap, yet the feedback was bad enough for this movie that the names of Ferrell and Reilly wasn't enough to entice the streaming giant.

It is also clear Sony's apprehension was warranted because during one of the biggest movie going times of the year, the movie only grossed 6.4 million opening on Christmas and got a staggering horrible Cinemascore of D+ (meaning people who came excited to see Ferrell and Reilly ended up hating their time).

It looks like this movie could have won a slot on my Worst of 2018 list, but I apologize if I don't want to see the latest offering from the man who helmed the not very good Get Hard. I'll have to skip this easy lay-up and suffer through spending my time watching stuff like Vice and BlacKKKlansman (movies I hope could make another year end list).

Today's lesson is that Netflix will not buy anything and actually knows how to say 'no. thanks.' Maybe this is the result of Netflix making a few purchases that they now regret and learned some movies aren't worth it. They don't reveal their viewing numbers but there is a chance that The Titan or Father of the Year proved to be flops by whatever standard they have, so they now choosing to be a bit pickier. Though they still release about twelve movies a month, so about over four times as many movies as a big movie studio.

This also means the Will Ferrell name has careened to Vince Vaughn or gasp! Rob Schneider levels when it comes to selling a movie. The comedian is still very funny and talented, but it is hard to not take some dings and scratches when your recent filmography consists of the two Daddy's Home. The House, Get Hard, and Zoolander 2. It is time for some reinvention and to steer away from doing the type of movies that once worked. He needs to look at the comedies that hit this year like Game Night, Love, Simon, Crazy Rich Asians and To All the Boys I Loved Before to see audience tastes have changed and the quality standard has been raised. Apparently, his usual act isn't even good enough for the current home of Adam Sandler pictures.

The next time I see a bad movie that was dumped on Netflix by an antsy studio. I'll know it was more sellable than Holmes and Watson.