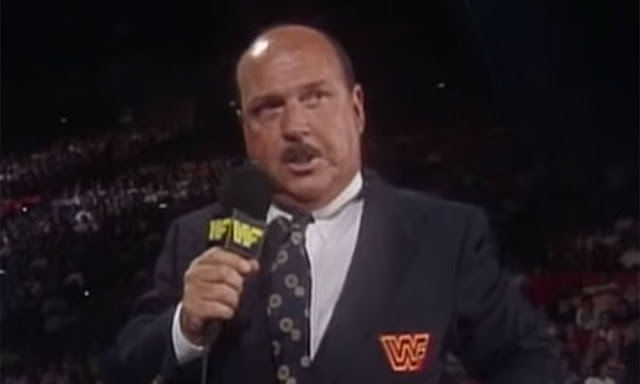 Off the top of your head, name your top five favourite interviewers in wrestling?

'Mean' Gene Okerlund was one of those unique wrestling characters that was funny and full of charisma but knew how to not overshadow the wrestlers and actually enhance their acts. He did some hilarious slapstick and witty banter with a comic legend like Bobby 'The Brain' Heenan (still miss him so much) and was a crucial part in making a Hulk Hogan interview something special and memorable. The all-time great promo guys like Ric Flair, 'The Million Dollar Man' Ted Dibiase, 'Macho Man' Randy Savage, 'Rowdy' Roddy Piper or Jake 'The Snake' Roberts were brought to the next level when they had Okerlund to play off.  He was even better for guiding interviews with the wrestlers who had much weaker mic skills or lacked charisma or almost helped save horrendous segments like the infamous Gobbledy Gooker debut.

The height of 'Mean' Gene Okerlund's career would be his WWF run from the mid-1980s to the early 1990s, and this was a time when interviews and segments were not scripted out or even practiced like they are today. There wasn't a room of writers that was crafting the weekly television and had scripts to be handed out to each performer. Back then there was usually a booker, who was the guy who came up with the feuds and direction of the company and when it was time for the interview or angle, the wrestlers would be given bullet points of what needed to be hit but the rest was improv. It allowed for much more lively and organic interviews, and just compare today's product to 30 years ago to see what was the better approach. Back then they relied on the larger than life personality of the wrestlers to make stuff work.

This improv component shows how important 'Mean' Gene was to the show. He had to help wrestlers to nail all the important information and also make sure the viewer understood the storylines being told. He had to keep things entertaining while also making sure the wrestler shined. It isn't until seeing numerous other wrestling interviewers over the years that I realize how talented 'Mean' Gene really was and how hard his job had to be.

'Mean' Gene was balding and not what you'd call 'TV Handsome'. Anyone aware of WWF/WWE owner Vince McMahon, you'd know how much importance he put on looks. I didn't realize it as a kid, but I now realize how often he tried to replace 'Mean' Gene. There was Ken Resnick in 1986 and Craig DeGeorge in 1987 (both would be considered good-looking and TV friendly), who started doing a lot of the interviews during that time while 'Mean' Gene was moved to hosting 'WWF Update' segments. But none of them lasted too long and the company always turned back to 'Mean' Gene as the main interviewer. I'd say he was one of the major faces of the WWF until he finally left for WCW at the end of 1993.

Over a year ago, we lost my all-time favourite wrestling personality and manager in the legendary Bobby 'The Brain' Heenan. After Gorilla Monsoon, Okerlund was the best comedic partner playing off Heenan and acting exasperated with his behaviour. It is nice to think that the three of them are now reunited.

Thank you, 'Mean' Gene Okerlund, you will always be the greatest wrestling interviewer of all time.