Even if a Movie isn't Great, At Least the Creative Process is Almost Always Riveting 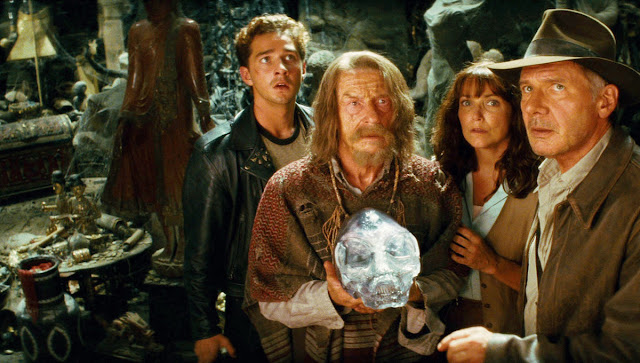 I get that it isn't cool to like Indiana Jones and the Kingdom of the Crystal Skull. To be honest, I remember almost nothing about the movie since I only saw it once right after it came out on video. I remember not loving it but also already being aware of the hate for it, it turned out better than my expectations. Everett on the other hand has seen it recently and adores it, but you should also understand he is seven and loves everything Indiana Jones. I think this one has a soft spot for him, because he got to see it with his grandparents.

Even if it isn't the most beloved of the series, I found Adam Chitwood's piece on Collider about the long development process of the movie to be fascinating. The movie was in the planning stages since the early '90s and for whatever reasons, George Lucas was obsessed with the idea that Indiana had to battle aliens. I get that the original three movies was a homage to the 1930s and 1940s adventure serials, but not really sure why they needed this iconic character to be in a homage to the 1950s creature features and alien invasion B-movies. It seems like Lucas' attachment to that concept may be part of the reason it took so long for the movie to start being filmed, because Steven Spielberg and Harrison Ford were less than thrilled with it.

Despite what we ended up getting, I'd say at least it wasn't our whip-cracking hero up against Martians like the original concept seemed to promise. Though to be fair, the series has always been heavily influenced by pulp with plots revolving around magic rocks and spirits that can melt your face. It was never intended to be grounded in reality.

The most fascinating thing to me is seeing how long it took to develop the film and how it evolved over almost two decades before it was released. It went through several different screenwriters and each one seemed to contribute since parts of their scripts made it to the final production, but there was only one screenwriter credit in the end. I also find it fascinating that since Spielberg is the lone director of this series that we always see it as his baby, but it becomes clear from this article that Lucas may have had a stronger hand in all the actual stories in the series. It is a reminder that when we heap blame or praise on a filmmaker or writer that there may be several uncredited factors and individuals

The piece really demonstrate how much work it takes and how it is miracle for any movies to finally get released. It is easy to be critical of a plot or disparage a movie for its budget or find numerous issues, but the reality is, there are so any moving parts that make it near impossible for any movie to come together. It happens all the time so we take it for granted, but I really love reading or hearing about these peeks behind the curtain to learn about how the process unfolds.

The movie may not be great but the development history is gripping and a nice lesson in the challenges of movie making magic.
Indiana Jones and the Kingdom of the Crystal Skull Movies Musings Pimpage