I'm Destined to See the 'Frozen 2' Trailer One Billion Times 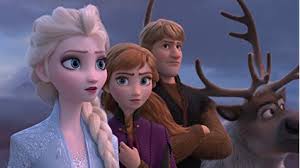 Before I saw the original Frozen in theatres, I knew it was inspired by Han Christian Andersen's fairy tale, The Snow Queen and that it was a Disney musical, What I didn't know was that I'd be entering into a packed movie theatre on opening night and it would turn into a phenomenon to the point of easily being one of the most popular movies of the past decade (at least among young girls). Danika had not been born yet, so I couldn't know that I was in store for a future where she would want to dress up as Elsa every single day, get me to wear an Anna wig, have to sing 'Let It Got' several times a week and have Frozen be the movie that I've probably watched the most in the past two years. Judging by how important Frozen has become in this house, it was inevitable that a sequel would arrive. I've already been informed by Danika that she will be going with me to see it.

She has already got me to see the new trailer three times, and that only stopped because she has run off to play out some of the scenes. She also has got e to help her put on and take off her Elsa dress so she can properly re-enact the wave running scene. As well, I've had to answer 'I don't know' 20 times to her question about who Anna is slashing the sword towards. Danika was also thrilled to see an army of 'Sven's and has decided that they are either chasing Hans or saving Anna from the cliff. My impression is my daughter is a little bit excited about the trailer and can't wait for the movie to come out tomorrow (or you know the actual release date at the end of November).

It might be due to the fact that I've watched the original more times than I can remember or have played the character of Anna or Kristoff even more, but this trailer actually got the 41 year old grown up me a little excited too. This is the epitome of a teaser trailer as it tells us nothing about the plot, but as anyone who has read my stuff will know, I prefer my trailers to be tantalizing and vague rather than delivering major plot points. It is fun going into a movie knowing as little as possible, and that is hard when I see about two billion trailers a month.

What we know is our favourite animated five-some is on some kind of adventure and journey, and there are times when all of them are separated. Elsa does some ice surfing, Kristoff has a reindeer army, Anna goes cliff jumping, and there appears to be a new character hanging out in a forest. I can't forget that Anna wields a sword, but I feel that scene may have just been created for the trailer, but Danika will be infuriated if Anna doesn't do some sword swinging as that is a major talking point over here. My guess, is some type of curse or evil takes over Arendelle and our heroes must go on a grand adventure to fix it. They sure to look worried for most of the trailer, so I assume it isn't just summer vacation. It looks like they are trying to do a different story with the popular characters rather than recycling the original movie plot, which is always the best way to do a follow-up.

I also really trust Disney's animated studio when it comes to sequels. They tend to not greenlight a theatrical run for a follow-up movies unless they have a really strong idea and feel it will match the previous. Disney is all about making the franchises, but when it comes to animated features they will go to straight-to-video unless they have something golden due to the amount of years it takes to make theatrical worthy animated feature (there is a reason it has taken this long for a sequel to a massive 2013 hit).

Consider me all in on this one, and even if I wasn't, Danika would demand us to go see it anyway.