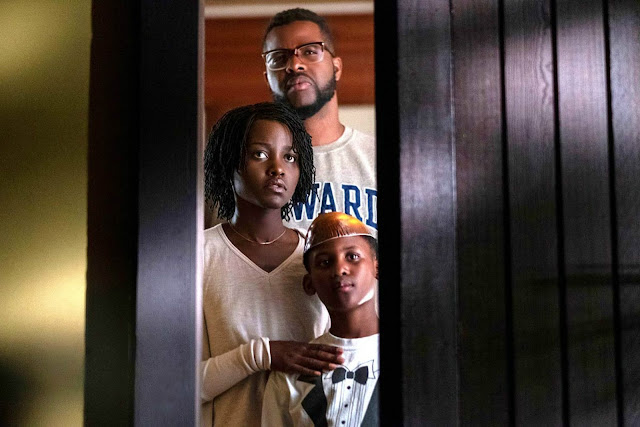 Can you believe it? March had movies. In the theatre! And I saw some of them! And for the most part, I'd say it was a pretty good month for flashing pictures on the big screen.

Captain Marvel was a fun movie and a solid introduction to a character who will play a huge part in the Marvel Cinematic Universe going forward. The problem is that I don't think the movie ended up being as big as the character and it lacked some of the distinct personality of recent movies like Black Panther and Thor Ragnarok. In my review for it, I said it reminded me more of Phase One Marvel with movies like the first Iron Man and Thor. It was a disappointment that such a socially relevant movie like the first lone female-led superhero movie came off as pretty good rather than ground-breaking and game-changing. It was still a movie with some smart humour, Brie Larson brought lots of personality to the lead, she had terrific chemistry with Samuel L. Jackson, and it was a great taste for how cool Captain Marvel as a hero can be. If I had to rank it, it'd settle somewhere in the middle of the 21 Marvel Studio movies along with the likes of Doctor Strange and Ant-Man.

Five Feet Apart was the weepy drama about two teenagers who were terminal cystic fibrosis patients that fell in love. I really believed the chemistry between Haley Lu Richardson and Cole Sprouse, and Richardson has all the skills to be a long-term lead. I cared about these characters and I think there are a lot of people who will enjoy this movie, but it missed a recommendation for me because it became a little too formulaic and melodramatic. It felt too manipulative in how it wanted to get your tears flowing, so it got none from me. Even thought it just missed my endorsement, I want more movies like this, because variety is a healthy thing for the future of movies.

Speaking of wanting the tears, Wonder Park was an imaginative animated kid's adventure that dealt with tough material like dealing with loss and childhood depression. It also showed the power of creativity and imagination, and I thought the magical amusement park looked majestic on the big screen. Part of the fun for me was watching it with my family, and Danika loved this movie because I think she saw a lot of herself in the female lead. Plus, it had cute talking animals. This one also missed getting a full recommendation from me, but I did like it daring to tackle some tough material and it was a great visual treat.

Then we have the movie that on its own has made March the contender for the best month of 2019 so far. Jordan Peele proved he is a master of horror with the very smart and creepy Us. It works as both a homage to classic horror, a scary social commentary and a twisty thrill ride. It also shows Peele growing as a filmmaker as every shot and use of music and prop has a purpose that enhance the story and adds layers to the messages. We all knew that Lupita Nyong'o was great, but this is award-worthy as she plays both the sympathetic hero and the very frightening villain. I love the Twilight Zone direction the story takes, and I think this is a very re-watchable movie that I hope to catch a few more times before year-end. I try not to use this word often so that it means something, but I am declaring this a horror masterpiece.

My review of Dumbo will be on The Movie Breakdown tomorrow morning, but I will reveal right now that I think this is a beautiful and feel-good adventure with a positive message for families. It doesn't quite reach the height of the best Disney live-action adaptations like Jungle Book and Beauty and the Beast, but I'd say Tim Burton is back in form by creating a beautiful, imaginative, living world and a movie flowing with optimism at its core. I think the second half falls apart a bit, but I cared about the characters and for the most part was swept up in the adventure.

March was another win for the theatres and the first month where we got a best of the year contender. April is looking huge with a Stephen King adaptation, a DC movie, the biggest Marvel movie ever, a Laika animated adventure, more horror, a remake of a cult hit, and even a Christian drama. I hope to deliver on way more written reviews in April along with my usual podcast reviews. The way more should be an easy goal as I've completely failed on doing any this year so far.

Here are the links to episodes of The Movie Breakdown we posted in March (first episode of March, I linked in my last month wrap-up):

The Breakdown of Captain Marvel, The Boy Who Harnessed the Wind, Paris is Us and Remembering Luke Perry

The Breakdown of Us, Triple Frontier and The Photographer of Mauthausen