Scott is Back to Give 'Us' Box Office Predictions 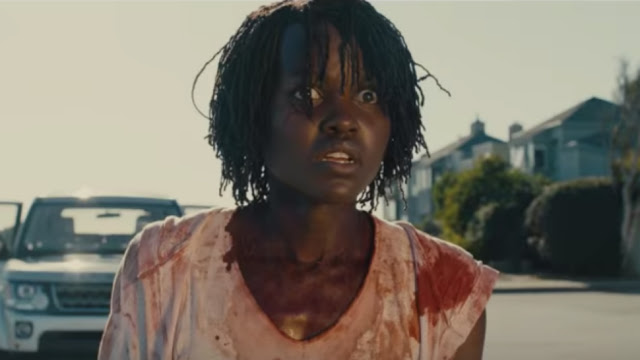 After a few years' hiatus, Scott Martin (my amazing The Movie Breakdown co-host) has returned to offer his weekly box office predictions for opening movies. It is an exciting week to return with Jordan Peele's sophomore effort, Us, the follow-up to his massive hit, Get Out.

I think there are a few directors that have gained such a golden reputation or a devoted following that their being attached to helm is the major selling point for a movie rather than plot or if it is part of an established name or series. You've got filmmakers like Quentin Tarantino, Christopher Nolan and Stephen Spielberg who have a devoted audience excited about anything they helm. After only one movie, I think Jordan Peele has now earned that reputation.

To illustrate why I think Scott's prediction today may be correct, I want to mention that I went to the Thursday preview screening of Us last night. The late-night Thursday preview screening is often quiet even for MCU and big event movies, because most people have work the next day and just wait for the traditional Friday opening night. It was to my shock that when I waltzed in right before showtime, the auditorium was almost 80% full, something I have only seen for Star Wars movies.

Enough about me, here is Scott's prediction for this weekend.

It sure has been a while since I have sat in the chair of prognostication and written my thoughts on the upcoming weekend in cinema. If I were to say that there just hasn’t been anything worth writing about in the last three years, it is possible that shenanigans could be called. Regardless of whatever poor reason I could give for my prolonged absence, this weekend is a solid one to dig into. There is only one film opening in wide release, but there are many possible talking points around it.

An argument could be made that big names on the marquee don’t pull an audience the way they used to. There are several constant earners such as Dwayne Johnson, Will Smith, and Tom Cruise, but they can still have box office stumbles. In the horror realm, the name James Wan is pretty much a cash guarantee. He hasn’t helmed a film (horror or otherwise) that has opened to less than $40 million since 2011 and is one of the most influential horror directors of the modern age. A new face has come onto the scene that I think has a credible chance of overtaking him as the premiere director of the genre.

Comedian Jordan Peele knocked critics and audiences off their feet with his wildly profitable and acclaimed, Get Out. While I believe Wan is the one of the two people who opened the door for story driven horrors, Peele is one of a recent wave that have kicked it down. His debut film was remembered at awards time, being nominated for four and grabbing a win for Peele with Best Original Screenplay. Having his name talked and written about during awards season was a gigantic megaphone that increased his exposure, something that I think will have at least a bit of an effect this weekend.

While Get Out opened to $33 million, one million more than the 2010 remake of the hugely popular A Nightmare on Elm Street franchise, audience reaction led to it making $176 million compared to Nightmare’s $63 million. The reason for this comparison? Horror movies can suffer a massive drop off after opening weekend, and Get Out’s opening weekend only ended up accounting for 20% of its total. Off the top of my head, I can only think of horrors The Others and The Sixth Sense that have outperformed in having long legs in the box office (I’m thinking I have forgotten other examples).

When you combine the name that Peele has made for himself after just one movie with the momentum that Get Out managed, it is safe to guess that Us is going to fair better. The big question, though, is by how much? Horror is a much more sophisticated genre than it was ten years ago, and breakout hits are not uncommon. I think Us has the chance to be one of highest grossing horrors of the past few decades, although I can’t see it beating The Sixth Sense ($293 million domestic, $672 million world wide) and It ($327 million domestic, $700 million world wide). Regardless of where it ends up accumulating, I think it is in for an opening weekend that may end up getting even more horrors green lit in the near future.