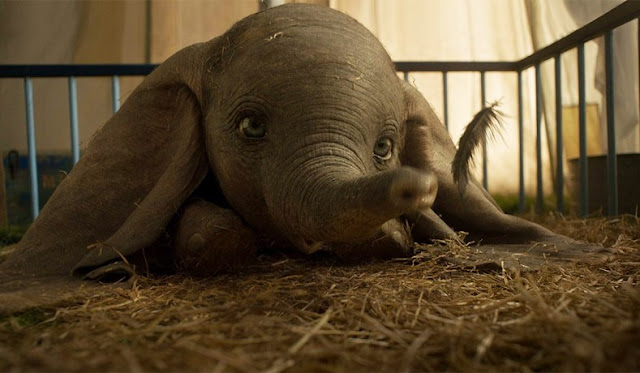 Scott is back with some analysis on the opening weekend numbers for two new releases. This is one of the week's where Scott can't gloat about his prediction powers but rather explains away how he missed the mark.

He has some good analysis, but I do want to add that I think Dumbo is held up as a classic and I know many parents who show the movie to their kids. But it looks like it was not a classic that many of those parents were eager to be remade. That is the sometimes the issue with a popular story, not everyone is wants to see it retold when they have a perfectly good version already (though the original could do without the racism).

As for Unplanned being R-Rated, I should mention a little movie called Passion of the Christ that didn't seem to have too much trouble drawing out the Christian crowds.

As much as I would like to think of myself as some sort of prediction machine, eating hamburgers on Mount Olympus while breathing fire, sweating spring water and nailing opening weekend box office guesses, I have been known to get them wrong sometimes. In the case of this weekend, I messed up on two out of two movies, making my failure complete.

On Friday, I had written about Dumbo, and that the Disney name would carry it to success. That turned out to be slightly untrue. While it’s opening of $45 million isn’t horrible, it isn’t great for a film that had a budget of $170 million. I was fairly confident in my guess of $55 million and was very surprised that it under-performed.

This is nowhere near a death knell, but I’m wondering if there will be any reactionary discussions amongst executives at Disney. With a CinemaScore of A-, I don’t think the performance is an indication of people disliking it, but perhaps more towards Dumbo not having the same ‘classic’ status of films like Cinderella or Beauty and the Beast. Really, this is just an indicator to a big studio of something that has been proven for decades: recognizable properties don’t equal hits. Personally, I think there is a place in Disney’s line up for these smaller title live action remakes (like Pete’s Dragon or Christopher Robin), they just need to line up with a proper budget.

The other film that I got completely wrong was Pure Flix’s Unplanned, a Christian drama about abortion. If you were to look at the situation from strictly a numbers perspective, my prediction of $2 million may have been considered a bit low, but still very appropriate. I was confident that the fact it was an R rated faith-based film would hinder its chances. The signs were there that I was wrong, such as advanced private screenings and group ticket sales.

Ultimately, it ended up being Pure Flix’s second highest opening weekend ever, with almost $6.4 million. For another notch in their belt, Unplanned also ended up being the fourth highest grossing film of the weekend. Part of its success, I’m guessing, is that it focused on a hot button issue, and one that could get Christian audiences moving. Add on the fact that the audience score on Rotten Tomatoes (because the audience score must be accurate) is 94%, and you have a mild success on your hands. I’m not trying to downplay the film by saying ‘mild success,’ but while it was a landmark film for Pure Flix, it still didn’t come anywhere near several of the breakout faith-based films.

Also, I need to add that there was a reason why I didn’t include Harmony Korine’s The Beach Bum in my Friday predictions. When writing the piece on Thursday I was unable to find an accurate number of theatres that it would be screened in. While it does have numerous big names worthy of discussion, such as Matthew McConaughey and Snoop Dogg, it wasn’t something that I could predict with any confidence when lacking theatre numbers.
Box Office Dumbo Movies Predictions Scott Martin Unplanned