'Shazam!' Looks to Fly to the Top of the Box Office While 'Pet Sematary' Claws Away for Scary High Box Office Numbers 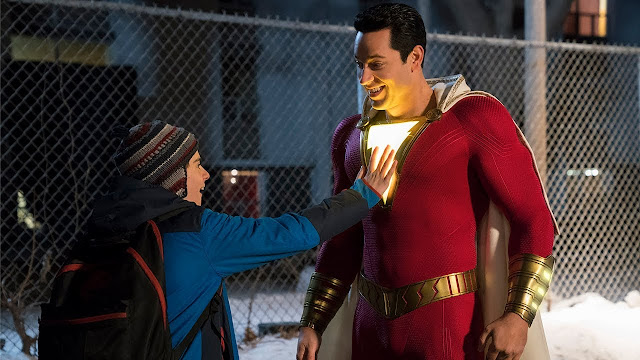 Scott is back with his weekly box office predictions this wekk, while I try to come up with clever titles for them. This is a tough week as I think all three movies could go way above expectations, but there is always a chance for the reverse to happen for one of them as well. Scott details if he thinks the movies will have big openings and provide some analysis for how he arrived at these predictions. As always, a great read for people interested in the box office.

Spring time is upon us, and that means it won’t be very long before The Avengers is unleashed. Until then, Warner Bros is aiming to grab some super hero cash. As well, the remake of Stephen King’s Pet Sematary will be battling it out with Us for tickets from horror fans. Rounding out this weekend’s new releases is STX’s drama, The Best of Enemies.

The latest super hero film from Warner Brothers is far away from the tone and aesthetic that Zack Snyder used to build the DC extended universe. I wish the man no ill will, but I think the franchise is better now that the films are more individualistic. James Wan’s Aquaman may have had the smallest opening weekend for the DCEU but was only the first film to break $1 billion world wide. It proved that audiences hadn’t been rejecting DC flat-out, and they could get behind one of the lamer super heroes if the film looked good enough.

While I don’t think that Shazam! is going to be the wrecking ball that Aquaman was, I do believe that it will perform well. There is a charming uniqueness and sense of fun with this film. When you think about the modern super hero era in cinema, they aim to present themselves as movies for the whole family. In the case of Shazam!, it nails the idea of it being for kids as well. What kid doesn’t dream of suddenly becoming a super hero?

Currently, the film has a Rotten Tomatoes rating of 93%, which is a big win for the film, although DCEU films have still rocked big openings even with poor scores. The timing of the film may not be the best for its long term earning (with Avengers just weeks away) but positioned almost a month after Captain Marvel shouldn’t harm it. The last few years have shown that multiple big films can exist in the spring. Personally, I think the playful and distinct nature of the film is enough to get audiences out, even if there was a big super hero film not too long ago. I’m going to be bold and predict that this fun looking film will perform to the higher end of expectations.

I’m pretty sure that this was the first Stephen King novel I ever read. There was one moment in particular with the back of an ankle that haunted me, and it looks to make a horrific appearance in this remake. The concept of the film hasn’t gotten any less spooky over the years, and the trailers look like this movie could be incredibly atmospheric. When I was a lad, his name was enormous, and films like Pet Sematary look like they can introduce him to a new generation of horror seeking youngsters. Two years ago, two of King’s stories ended up on Netflix, and another two in the theatre. The biggest of the bunch was It, a landmark success for horrors. King’s stories seem to be constantly made, but I do believe that his name has grown once again.

The big problem for this film is that Jordan Peele’s Us only came out two weeks ago. With some horrors, that’s not an issue as they drop severely after opening weekend, but Peele’s film isn’t like that. I think Pet Sematary will still be successful, but not as much was if it were to open at another time of year when it wasn’t going against an Oscar winning horror specialist. However, there are some indicators that Pet Sematary could bust through expectations. According to fandango.com, it has more pre-sale tickets than A Quiet Place did last year.

There is a chance that this film could fly past expectations, but I am not in that camp. I predict that it will have an extremely healthy opening weekend, nonetheless. The trailers look amazing, horror is hot, and the Stephen King name is hot. I’m delighted by an amazing cast of Jason Clarke, Amy Seimetz, and a really cool looking performance by John Lithgow.

The Best of Enemies

A movie about racial segregation, this could be some really clever counter-programming. Some studio executive may earn their wings for picking this weekend. Adults have shown that they will head out to theatres if the offering looks right, and the fact that this has Oscar winner Sam Rockwell and Oscar nominee Taraji P. Henson, this could prove tempting to audiences.

The biggest downside right now is that at the time of writing, there is no Rotten Tomato rating. Bad reviews don’t necessarily sink opening weekends horrors or DC super hero films, but they seem to mean something to the older audiences, and I can’t blame them. If adults are having to not just pay for a movie ticket, but also a babysitter, being more discerning is the smart thing to do. With the film only being in 1,700 theatres, its potential top end is limited. I could see it going as high as $10 million, but I’m thinking that will not end up being the case.