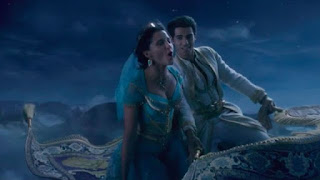 2019 has been an odd year when trying to judge where it stands quality wise compared to previous years where I've been reviewing at least a movie a week (2013 to now -- though 2012 is when I first got paid to review movies, but I skipped several weeks throughout the year). We are at the almost halfway point, and I already have two movies that I gave four stars. Several movies exceeded my expectations, and most times I left the theatre feeling mostly satisfied. Yet the year still feels really flat.

I am starting to think that has less to do with the quality of movies and more to do with my own emotional state. I'm really frustrated where I am professionally, and the blog has been neglected. I have hit very few of my goals. While I don't want to come up with an easy excuse, I've been struggling with a lot of anxiety which has led to depression. The depression has wiped me out at night, which is the time I usually do a lot of writing (day writing was much easier when the kid I was looking after was 'has no problem reading or quietly playing' Everett compared to 'ride the laundry hamper down the stairs' Danika).

The depression has led to a disconnect with my kids and Emily. Knowing that I haven't been as invested in them as much as I should has made me feel guilty and even more depressed. Remember those goals I set out to accomplish in 2019? I don't think it is even worthwhile giving an update at the mid-year as things currently stand.

I've talked about this all before. I'm trying my best to think positive and shake this funk. For the first time in awhile, I'm confident that I can do it. But my point is that unshakeable sadness has affected how I perceive 2019 and that is likely why I feel kind of 'meh' about it as a movie year despite loving movies like Us, Avengers: Endgame and How to Train Your Dragon: The Hidden World.

All that to say, May as a kick-off to the big summer movie season has to be deemed a major success from a quality perspective. The month started off with the raunchy romantic comedy Long Shot that proved Charlie Theron can truly do anything. She hasn't done a lot of comedies, but she delivers the zingers and energy here. She also has a great chemistry with Seth Rogen where you root for them to get together. It also blends in politics with the storyline that she is running for President and I liked that it was mostly an open-minded movie where there is a fantasy conservative and liberals can get along. It also was a case where the female didn't need a guy to loosen up and be fun. It respects her and lets her be cool. It also shows that a good relationship is one where both members grow and improve from it.

I ended up skipping Detective Pikachu, because due to a consequence, Everett couldn't go see it and all review pointed to it being great for those that love Pokemon. I don't get Pokemon, even after seeing a few of the animated movies with Everett, so without being able to enjoy his company, I deemed reviewing it to be pointless.

The next week, I did get my John Wick Chapter Three: Parabellum on. This is one of the greatest action series ever and rivals Mission Impossible as the most consistent modern actioner. It is great because you can actually follow the action due to great choreography and real stunt work. I also love the world-building of this assassin world with their rules, codes, currency and shops. It is a giant double cake of awesome for any fan who loved 1980s action, but it is confidently its own thing. Keanu Reeves is amazing here as it uses his form of charisma perfectly and he works hard for the action to look believable. Halle Berry deserves props for being a highlight in this movie. The ending was a bit anti-climatic and the story was the weakest of the three with the action becoming overkill by the end, but I still recommend it, even though I prefer the other two movies. This one may also grow in appreciation from me on rewatching.

Aladdin is yet another example of Disney delivering on their live-action adaptations of animated features. It probably is the one that follows the original story the closest, but the added material does enhance the story. Will Smith nails it as the Genie acting as both a homage of Robin Williams but making it his own. Mena Massoud who plays Aladdin and Naomi Scott who plays Jasmine are rising stars who embody the characters, and Scott has a soul-lifting voice. I also love the new focus on Aladdin and Genie's relationship and Jasmine being a stronger political figure who wants to be sultan.  It is clear that Guy Ritchie has never directed a musical as the numbers don't pop like the original, but he adds a nicer energy and humour and proves he can do a family movie.

My Godzilla: King of the Monsters review is on The Movie Breakdown tomorrow. I will say it was a huge disappointment. You get more monster fighting action this time, but it also proves maybe that isn't a good thing. The sequences have cool moments, but some of the fights are hard to follow due to quick edits. The humans are also the worst and have awful dialogue that makes talented actors seem awful. We get way too much human storyline that makes this movie a bit of a bloated bore.

Due to catching yet another illness, I haven't seen Rocketman yet. A review should be up later in the week.

Here are The Movie Breakdown episodes from May:

The Breakdown of Marvel Movie Magic, Plus Remembering John Singleton and Peter Mayhew

The Breakdown of the Atypical Blockbuster - The Departed, Kramer vs. Kramer, Unforgiven, Good Will Hunting and Psycho