Disney Plus Coming Earlier Than Expected but Will It Be Like the American Version? 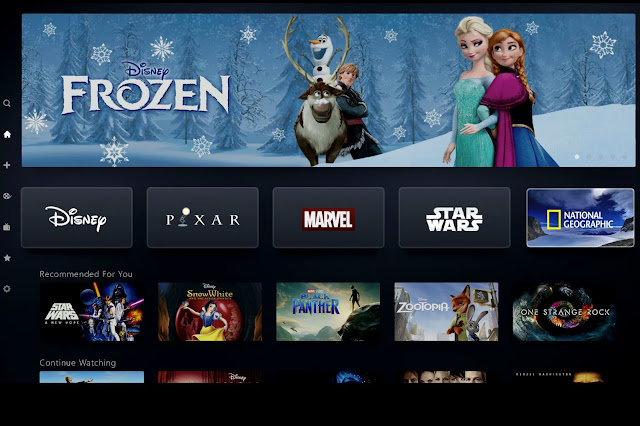 In news that I wasn't expecting, Disney Plus is actually launching in Canada on the same day as in the United States, which is November 12th. Which also happens to be just a day before my birthday, so Happy Birthday to me from Mickey Mouse.

I talked about this briefly on Twitter and Facebook as an attempt to do 'exclusive' content on those platforms, but I feel like I'd rather write a bit more here. I concede I haven't quite found a way to make my other non-blog social media something worth following, as I still prefer to do most of my thoughts on here. I'll continue to chisel away on the social media boulder with my dulled spoon as I try to sculpt a following on the different platforms.

Being a Canadian, I am used to something new. shiny and exciting being announced to launch in the United States and then finally getting a watered-down version in Canada about five years later. So, I wasn't quite in the mode to figure out what I would be doing with Netflix yet, since I thought I had at least another year.

The even more pleasant surprise is the price point at $8.99, which makes it far more appealing than Netflix's recently jacked up $13.99. To be honest, I only ever watch Netflix Originals to review for The Movie Breakdown and so, I don't really agree with the major price hike so they can cover all their in-house programming. Especially, since stuff like The Mandalorian and all the new MCU series feel like must-see programming, so their original stuff is far more exciting. Netflix's days in the Spicer house may be numbered.

One of the reasons that I wasn't expecting this announcement is that I was sure the Netflix and Disney deal had another year on it (each country has different deals, which is why Netflix Canada is different than US). But I wouldn't think Disney would want to launch an extremely watered-down version of their streaming service with all their Marvel movies and new animated releases over at a competitor still. Unless this was spur-of-the-moment announcement, I assume they will have a significant portion of their library on launch day, which likely means Canadian Netflix suddenly loses a huge number of movies and shows in November.

Of course, it could be that Canadian Netflix still does have a deal until 2021, and Disney is relying on their original shows and movies created for the service being enough to be a selling point in Canada. I think, it is better to launch with as much great stuff as possible rather than rush things here. I guarantee you that potential Canadian subscribers will be looking towards having all the Disney animated movies, all the MCU pictures and the Star Wars movies come November 12th, 2019. If it is going to be a success here, I hope I am wrong on the Netflix and Disney deal and they are ready to come fully loaded.

Also, how long will that $8.99 deal last? My guess, it will the first year and then once they have an even more sweeping library and their subscriber numbers make investors salivate, they'll up it closer to the Netflix price point.

In Canada, the major streaming services are Netflix, Amazon Prime, Crave TV (sort of like our HBO Max) and DAZN (for sports). There may be a few other services, but most of them are just supplemental services attached to their cable channel (which I realize is also kind of Crave TV, except it can be ordered without a cable package). While that isn't as many as in the United States, that is still a lot of competition already for consumer dollars and that isn't including cable/satellite TV and all its speciality channels and packages.

Though one area that gives Disney Plus a huge advantage, especially if it launches with the full library, is that outside the Disney cable channels, I don't think any of the other movie channels here have deals to show Disney movies (I know Hollywood Suite and Crave TV have deals for 20th Century Fox, but not Disney). They are delivering movies that haven't been available on any other Canadian services or channels (unlike where Netflix, Amazon Primes and the movie channels have 50% of the movies are the same).

Now, one thing that won't happen is the ESPN Plus and Hulu Plus bundle with Disney Plus that is happening in the States. ESPN would never get approved by CRTC with Sportsnet, TSN and DAZN already being here. If ESPN had a chance, it would have been approved as a cable channel a decade ago. While Hulu has also been something Canadians have been waiting to come into Canada, but it keeps getting pushed every year. Though there is now talk that since Disney owns it that they want to bring it to Canada.

Here is the thing, it will come in a very different form than what is in the United States. 20th Century Fox already has deals in place with Crave TV and Hollywood Suite, so I don't know if Hulu can show those movies (but since it isn't an exclusive deal, maybe they can). I also think several of the Hulu shows are snatched up already by other services. If Hulu in Canada wants to stream new shows, it will have to work around deals already with Global TV and CTV and other channels. Plus, cable companies like Rogers and Bell TV will likely do whatever they can to try to delay Hulu coming here.

Actually, I wouldn't be surprised if Roger goes running to CRTC to try to delay the Disney Plus launch in November, Though I think streaming has a different set of rules than cable channels, and if there is nothing else carrying Disney entertainment than I can't see Rogers having much legs to delay them. I do think with the variety of shows and movies on Disney Plus, Netflix and Amazon Prime it gives even more motivation for the cord cutters. Really the biggest thing keeping cable going is live entertainment and sports, as DAZN is limited in the sports it shows and the other sports streaming services are ridiculously expensive.

If Disney Plus is coming in with the full library as they advertised for the United States, then I think we have a massive hit. How can any parent say no to $8.99 that gets them every single animated Disney movie ever along with MCU, Star Wars and Touchstone classics? It isn't like there is a magical device out there that plays these discs that have the movies on them. There is just no other way to watch this stuff. Impossible.

As a Canadian, it is nice to finally have a service that launches at the same time as the American version, now we must see how close our version resembles the American one.
Disney Plus Movies Musings News Streaming Services