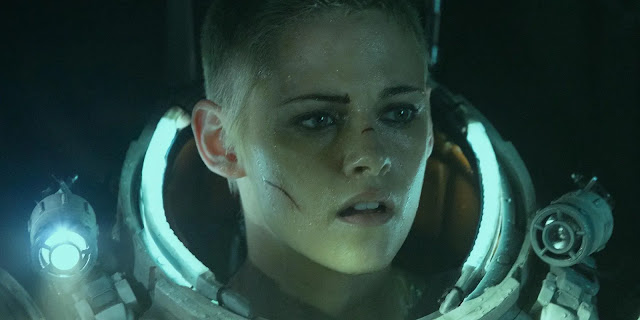 Most movie critics take great pleasure in declaring January the dumping ground for movie studios where they unload the destined to be worst of the year candidates. I'm not willing to join in that game anymore. Why? Well, this trailer would be a major reason.

Is Underwater going to be a good movie? I don't know. I haven't seen it and I won't see it for another few months. Does Underwater look derivative and borrows heavily from many classic horrors, thrillers, and creature features? Why yes, it definitely appears that way from the trailer. Just quickly off the top off my head this movie reminds me of Alien, The Descent, The Abyss, The Poseidon Adventure and of course, countless other movies that were inspired by those like The Meg or Life. But you know why we return to certain formulas, because they can still work. I have a huge glaring soft spot for' person is trapped in a dangerous situation and oh yeah, there happens to be a nasty creature that is really hungry too' movies. If you've been listening to the The Movie Breakdown for the last several years, you've heard me give praise to stuff like The Shallows, Crawl, The Descent, Alien, because when in talented hands, it is one of the most visceral movie experiences.

The concept is simple but near perfect. A team of deep-sea researchers must search for a way to survive after their underwater station is devastated by an earthquake, but things get more complicated when they encounter some deep sea monsters. Sold!

Of course, even though I accept the premise being somewhat derivative, I do still expect the movie to have some interesting characters, a few twists on the genre and some thrilling set/action pieces. The Shallows and Crawl may not be the most original movies of all time, but they work because they had great performances, likable characters and played around with the genre. Simply put, the love for the genre and care for making something high quality was evident.

Director William Eubank is better known as a cinematographer and I am not familiar with the other two movies he has helmed. He is mostly unproven, but for what I assume is a lower budget flick, it looks really good and the trailer shows some good action sequences. A lot of my faith comes from the casting of Kristen Stewart as the lead.

Stewart has been in bad movies, don't get me wrong here. She was the lead in a series that one entire gender loathes. I wasn't a big fan of Snow White and the Huntsman. But she has been doing mostly indie movies the last few years and most of them have been good. I am trusting her judgement in what she finally chose as her return to big studio pictures. Of course, this theory also means that the Charlie's Angels reboot is worthwhile (and to be fair, that trailer did look kind of fun too).

I mostly dig the casting here. I have a sneaky suspicion that Stewart may be getting Marion Krane'd. This may mean that Jessica Henwick gets to be the final girl. I don't know her as well as I haven't watched most of her stuff (she seems to be mostly TV), but she also has a role in Kong vs. Godzilla, so avoiding being killed by monsters seems to be her thing. I really dug Mamoudou Athie in Unicorn Store, but that was a comedy, so it will be good to see him play something different in this thriller (apparently, he also was in The Circle, but I like to pretend that movie was just a dream). John Gallagher Jr is someone who has impressed me a few times playing very different roles in stuff lie 10 Cloverfield Lane, Hush and Short Term 12. I am used to Vincent Cassal playing a villain, so it will be nice to see him being more heroic, but for the whole movie, I'll be waiting for him to pull an Ash and be the one behind all the carnage. It looks like this movie was filmed in 2017, so that would be why TJ Miller is mucking around. For the most part, it is an exciting cast with people that we don't see in every picture but also have proven to be talented.

My hope is also that this was a smartly put together trailer and they only showed us the first act, and so if I can go in full-on avoid more trailers mode until January, I can receive a few surprises (of course, I also could have just seen the entire movie in condensed form too).

I like January because it is one of the months that usually has a rather eclectic collection of genre fare. It is one of the few times where the big studios still offer up some quirky pictures that aren't afraid to go in some odd story directions. This movie may end up being a standard crew trapped with creatures story, but that is also a movie that I only get about once or if I am lucky twice a year and as I confessed is a soft spot for me.

A bit of an example of the diversity of mid-budget genre fare you can look forward to in January, we've got a horror remake in The Grudge, a Joel Kinnaman starring crime drama in The Informer, Dave Bautista saving the world and looking after a little girl action comedy in My Spy, a Tiffany Haddish and Rose Byrne starring buddy comedy in Like a Boss, an over decade long sequel in Bad Boys for Life (though they should have waited for the fourth movie to use this title and called it Bad Boys 4 Life), a Robert Downey Jr live-action family picture in The Voyage of Doctor Dolittle, Guy Ritchie returns to crime pictures in The Gentlemen, Sarah Paulson playing a less than upright mom in the thriller Run, a modern take on a Henry James' classic novel in The Turning (based on The Turning of the Screw), and of course, a Grimm's fairy tale update in Gretel and Hansel.

What other month would offer up a wacky slate like that? If you like odd and messy movies like me or at least, get some pleasure seeing misfires that at least tried to do something different than this upcoming January looks bit like movie heaven. Will I see all the movies? Probably not. Will they all be good? Most definitely not. Am I happy every one of them is being released? Oh yeah!

Of course, the must-see movie remains Underwater. This is the reason we even have the month of January.