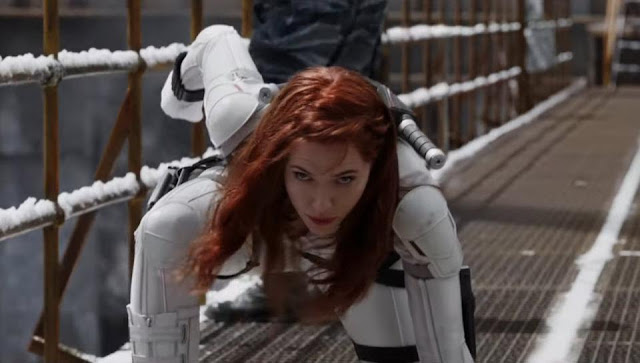 Many fans have been asking for a Black Widow movie for a long time. While I would agree that Scarlett Johansson's iconic character has deserved her own movie for over 5 years now, there is something special about this kind of story landing now. I love that Marvel has been able to get a mainstream audience to embrace bizarre, geeky, far-fetched, cosmic, galactic and time spanning, space adventures on a big scale blockbuster level. 15 years ago, I wouldn't have guessed that you could get the casual movie audience to flock to see stuff like Guardians of the Galaxy, Captain Marvel, Doctor Strange and even Avengers: Endgame. As much as I love those movies, there is feeling of freshness mixed with deep nostalgia seeing the Black Widow trailer hint at a more grounded back to basics with an old-school spy action-thriller.

Don't get me wrong here, this is very much going to be a Marvel movie. The villains are concealed in robotic armour, the heroes are decked out in gadget-filled suits, there will be massive explosive set-pieces, there will be many science fiction elements sprinkled throughout and the classic Marvel tongue-in-cheek humor is splattered all over the place. Its number one goal is to be a giant roller-coaster thrill-ride that Martin Scorsese warned us all about. I appreciate after the recent big-scale Marvel events that this one appears to be sticking on earth, there will be hand to hand combat action, maybe a little old-school car chases and a mission that is more intimate and personal.

For that type of picture, they landed a terrific director in Cate Shortland who gave us the tense and claustrophobic thriller, Berlin Syndrome in 2017. She has proven she can mix deep drama with some well-paced thrills and tensions. She knows how to knock out the twists and keep you riveted on the dilemma the hero faces. I'm really excited to see a talented female director get a chance to helm a huge blockbuster event film.

It will be interesting to see if a 'smaller-scale' action picture can gross Marvel numbers, and my prediction is that the Black Widow and Marvel name combined is going to make this a pretty massive hit. Especially, when you realize we haven't had a Marvel Cinematic Universe movie since Spider-Man Far From Home. Plus, this will likely be one of the last appearances of Black Widow, and the synopsis promises an intriguing concept of filling in the blanks of Widow's life between the hero dividing Civil War and the unifying Infinity War.

I love that the trailer follows the recent Disney strategy of not giving out too much plot and story. We do not know the mission, why Black Widow has 'returned home' and really any story details. Marvel just gave us enough to tease us and promise us another high-octane adventure with humour and mixes of emotion and family drama.

What a family that they have for us. Florence Pugh has been one of the stand-out young stars of the past few years and I am excited to see what she does in her first major role in a big tentpole. In the bits we see of her here, she looks absolutely terrific and seems to have a substantial part here.  It is almost always magic when we get Rachel Weisz, and I am interested to see if her character does a heel turn.  I am a big fan of David Harbour, who is best known for his work in Stranger Things, and it looks like he is having a blast in this movie. I can't wait to see this group play off each other and deliver the emotional core of the action picture.

I love the old-school spy-thriller action vibe that is being mixed into the big Marvel event movie. This should be a spectacular kick-off to the newest Marvel phase, and based off what is coming up, this looks like it will be very different than all the other proceeding pictures. I'm sold!
Black Widow Marvel Studios MCU Movies Review Scarlett Johnasson Trailer