Nothing Dangerous About Great Movie Writing 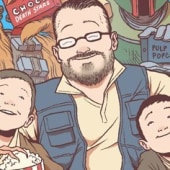 As a writer and podcaster of pop culture and most often movies, I feel it is right to help and promote my contemporaries. Especially when they are as talented and entertaining as Drew McWeeny, who is without a doubt one of the most insightful and knowledgeable film critics and writers about movies that I've ever read. I have promoted him before with his now 'cancelled' 80s All Over podcast, which was one of the best series about movies that has ever been produced. McWeeny is now starting another venture with a few times a week newsletter called Formerly Dangerous that explores both modern and classic films. I'm excited about anything McWeeny does and feel it is always worth checking out. It is currently free, though after it gets established, he has said it will move to a pay model. But jump on now and enjoy the magic of McWeeny, who is a talented writer who deserves support from those who love movies and love reading thoughtful pieces about it.
Drew McWeeny Movies Pimpage