Scott Martin Guest Post: Is 'The Last Airbender' Really as Bad as Its Reputation? 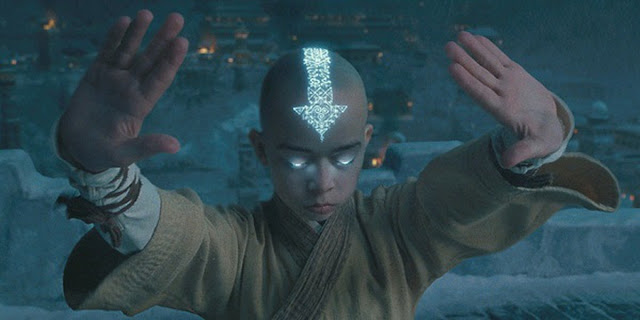 My The Movie Breakdown co-host, Scott Martin, decided by his own choice to watch and review The Last Airbender. This was not one of my picks for winning The Summer Box Office Challenge. He just woke up one day and decided that one of the ways he would live his life would be the watch The Last Airbender. Now, he has survived to share his review.

Gosh, it’s been a long time since I’ve sat down and written anything. One would think that with a global pandemic and being told to stay at home that it would be wonderful assistance for someone wanting to put words to page. Somehow, amidst all of this free time, I’ve not found the time. There have been attempts at new hobbies, like home music recording, researching building a custom guitar, and diving all in on homemade foodstuffs, such as bread and mustard. Lots of fun, but when my primary passion is writing, it can be called baffling that I would not be sitting at my computer more often.

Oh well. I’ve wasted my time. For the most part. M. Night Shyamalan has also wasted my time. Ever since The Last Airbender came out, I’ve been informed by people and the internet at large that it is an awful film. Nobody I know has ever defended it. The Rotten Tomatoes score sits at a sad five percent. Now, Rotten Tomatoes scores always need to be taken with a grain of salt. A high percentage doesn’t necessarily indicate a film is one of the best of the year. All it means is that a large number of critics think it’s good enough to recommend, and a movie with ninety percent may just be a film that barely passed the threshold for the majority. The same could happen with a film with, let’s say, only five percent. Ninety five percent of critics may have found the film tolerable, but just shy of being worth a recommendation.

Today I’ve decided to dip into the vault of consensus failures to see if The Last Airbender really is as bad as its RT rating would have us believe. When I hit play, I had hopes that the film would be pretty good, but just not cohesive enough to really champion as something people need to watch. While I had enjoyed Shyamalan’s earlier films, I found myself becoming less interested in him after The Village. I saw it at the theatre, and there were some alright moments sprinkled in. The problem was that the more time passed since I had seen it, the more I didn’t like it. Ultimately, it was a film where the entire purpose was for a few minutes at the end when the twist was revealed. There isn’t anything wrong with having a twist ending, but when that’s the only reason a film exists, it’s shallow and void of much else. Not having easy access to both theatres and rentals back at that time, I decided that Shyamalan’s films weren’t going to be pursued any more.

Thankfully, he has had a resurgence. In 2015, he directed the low budget Blumhouse film, The Visit. His budget of $5 million was a massive change from the $130 that was spent on his previous film, After Earth, which also wasn’t well reviewed. For me, he had returned to what made him popular years earlier. Yes, there was a twist, but the story he told on his way to that was engaging, and the characters were thoughtfully created and written. Seeing that film was like putting on that favourite pair of slippers on a cold winter morning. When looking at his films that I enjoyed, it’s hard to understand how he could have ever ended up making something as hated as The Last Airbender.

The film has now been seen by me. Is it honestly that bad? Yes. Yes.

Based on a Nickelodeon television show, the film had me questioning the source material. Either it was unforgivably bland, and Shyamalan had brought it to life with exacting precision, or it was decent, and Shyamalan had either no clue how to translate its appeal to the big screen or misunderstood what made it popular. My guess would be the latter.

The biggest problem with the film is that whenever a character opened their mouth to speak, my spine ultimately cringed with whatever came next. The dialogue was among the most simplistic I’ve seen in years. That’s not hyperbole. Pretty much any spoken sentence, utterance, or guttural noise felt like something I would have written in grades three through five. I like to think I was sophisticated enough in sixth grade to be above that script. Making the issue even worse was the delivery from each one of the actors in the film. The lack of energy, commitment, or care was universal. Even Dev Patel’s lines were both laughable as well as soul crushing. Patel also for some reason seemed to have only a singular expression on his face the entire time. The look can maybe best described as though he was remembering the time he lost a bet and had to smuggle a pineapple across the border in the most intimate of strategic recesses.

When it came to the action, I wasn’t opposed to how it was filmed. The problem, however, was the fact that I had no care for a single character. The atrocious dialogue, morale depleting acting, and complete assault of expository dialogue really robbed me of any care as to what would happen with the story. If ‘Character A’ dies, do I give a hoot? Nope, because they reached into my life somehow and made me regret a simple choice I made.

Also, something about the film has me beyond perplexed. There are groups of people in this film who can ‘bend’ different elements. There are water benders, fire benders, top soil benders (or maybe it was peat moss), and air benders. They can each manipulate their respective elements. The fire benders are feared because they can cause a fire source to shoot out massive attacks on people. As long as there is a source, even as small as a torch, they can cause havoc. And yet, the water benders are completely afraid of them. Water, afraid of fire. Huh? I know nothing about the source material, but I think I have even the most remedial grasp on fire control and elimination. Seriously, I can’t stop trying to figure out how people who could instantly spritz out the fire sources of their tormentors would be living in fear.

Perhaps that isn’t something I should be bothered over. Perhaps there was a line of dialogue (expository, of course) that provided an answer. When you end up paying less and less attention to what people are saying in a film as part of an autonomic self preservation maneuver, you may not catch the subtle nuances.

If you are a fan and defender of Shyamalan, that’s great. Good on you. We all need causes to champion. If you want to tell me about how wrong I was for my experience with the film, by all means. Leave a comment, write an email, go to reddit, or whatever. I know what I saw. I stared into the maw, and I didn’t like it. I have witnessed the coming and going of over 350,000 hours. When a simple hour and forty-three minutes leaves me questioning my basic skills of decision making, when it reinforces that all decisions can have untold consequences, I will stand by the fact that it wasn’t worth it. Bland, boring, unbelievably simplistic and yet sometimes incoherent, this film really is that bad.
Movies Review Scott Martin The Last Airbender