Scott Martin Guest Review: Is Pauly Shore's 'In the Army Now' Better Than Its Reputation? 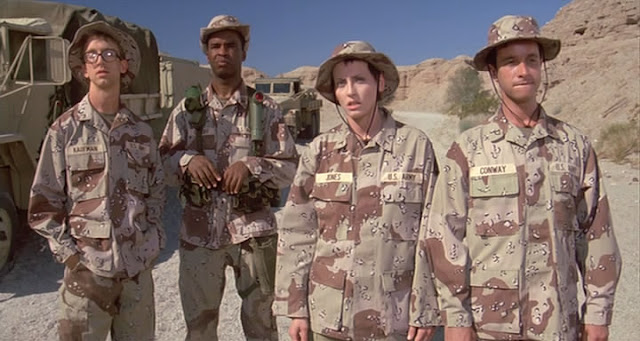 (CS: Today Scott decide to dip into the world of Paul Shore. He comes out alive but maybe not without scars)

My quest since the start of the pandemic has been simple. I shall hunt down movies with reputations of being bad and check them out to see if they are perhaps not really that bad. My list of films was already near unmanageable when I noticed I had a large blind spot. Not one film on the list was a 90s Pauly Shore vehicle. Should I want to feel as though I had done my best, I would need to include at least one of his films. (CS: If the goal was to find a potentially good one, I'd have gravitated towards Son in Law)

The big question was, which one? For the four years after Encino Man, the world was given four films starring Pauly Shore and his persona, The Weasel. (CS: For those thinking that I should have went for Encino Man, Pauly Shore didn't star in it, but it appears, it may not be as good as I thought as a dumb teen) We were blessed, some may say. We had it so good. Sadly, each film would make less than the one before it, with Bio-Dome bringing in only $13.4 million dollars. (CS: Ugh, Bio-Dome) That was the end of our dose of Shore. The magic had left the multiplexes.

To be honest and without sarcasm, I kind of liked Encino Man. The reasons I enjoyed it had nothing to do with Mr. Shore. Not one point in my misguided teen years did I ever find him funny, or anything short of annoying. There were people out there who enjoyed him, but the box office showed us that his shtick wasn’t one that the world would tolerate forever. Thank goodness for that.

Choosing which Shore movie to look at was easy. I picked the one that I thought would irritate me the least, and that was In the Army Now. It really says something that while looking into some of the worst films out there, I would intentionally try to pick one of the lesser evils. No matter what my intentions, I do not want to watch Bio-Dome.

Really, whichever Shore movie I selected; the conclusion would be the exact same. If you think Pauly Shore is funny, then you will find the film tolerable. That’s all. Should you not be one of those people, then any of the Pauly Shore films of the 90s will be torturous and demoralizing. This is easily the shortest piece I have written about any of these bad movies that I’m looking into, and the reason is simply ‘Pauly Shore.’ The only way any of his films will be anything other than dreadful is if you find him hilarious and whimsical. Otherwise, yes, any of those films is really that bad and must be avoided at all costs. (CS: I say, you need to watch them all before you can assume that they are dreadful. Though, of all the irritating 90s 'comedians' he does seem most likely to be consistently awful).
In the Army Now Movies Pauly Shore Review