Not Really Back to School Day 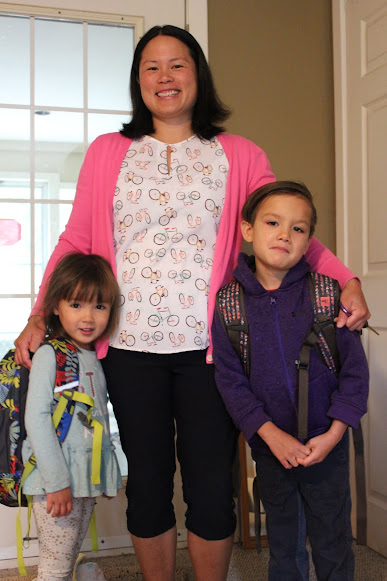 The above picture was taken exactly a year ago and was the return to school for Emily and Everett and the day before Danika's first ever day of school (our school does staggered Junior Kindergarten entry, so she started on the Wednesday). It was a momentous day as it would be one of the last days that as a dad, I would have someone home with me during a school day. I was rather thankful for the potential of a workday where the only interruption would be the dogs needing to go outside to take care of some business. It meant I'd be able to take care of my own business, except mine is more work-related business and hopefully, stinks a lot less than what the dog do outside.
Little did I know that everything would change in March where Emily and the kids would be home very often as the physical schools were closed and online learning became the law of the land. I decided to look at things more positively and take it as a chance to spend more time with my kids and be more engaged with their learning. I was thankful with the extra time I got to spend with them.
I won't lie; I was also really excited for them to get back to school. It was a challenge trying to be productive while helping kids with school or just being distracted because they're young kids who have mastered the art of interruption. To be fair, my kids are really good at entertaining themselves but they also love being with their dad and I can't get too upset about that. I had great fantasies of all the work and projects I'd accomplish with the kids going back to school in September.
Except that isn't the reality.
While Ontario has reopened physical schools, there was also an online option. In August, we had to the choose one or the other, but the caveat, you could switch to either come Thanksgiving (October in Canada), after Christmas and after March Break. We had initially opted for in-person schooling. Emily is going back to work as a high school teacher and she has some major concerns on account that we've noticed many teenagers aren't mastering the art of social distancing and current reports is that is one of the demographics with the highest cases of Covid-19. Emily felt that since she was now a risk that it may be better not to also expose the kids. Now, there wouldn't be a concern if we actually had a clear plan on how schools planned to deal with social distancing in classrooms of 20 plus kid, but they never revealed such things to us.
It was decided that we'll allow other people's kids to be the guinea pig and we'd opt for online schooling until at least Thanksgiving. I admit that I was initially not excited about this change, but it is the safer option. I can make it work since this time it is supposed to be heavily teacher-led online and I own three computers. The plan is to sit each kid in front of their own computer and then I'll work away on mine. If they need help. I won't be far away.
But even though any other year the day after Labor Day is the first day of school, 2020 is year everything is different. Emily doesn't teach until Thursday, though she is going into work today. While as of today, I have no idea when the kids start school, I got an email claiming we will hear from the teachers this week, but Emily says that there is a posting for applications for all online teachers that runs into Thursday. So, that would mean interviews start on Friday and from everything I've learned in my life that is the end of the week. I am not really confident in any contact from a teacher this week or the kids starting school on Monday.
I will be very happy to be wrong about this. I also feel really bad for a teacher if they get hired Friday and are expected to have lessons and the online format all figured out by Monday. Like I said, I'm guessing it is more likely kids start in the middle of next week, I think.
Anyway, this would be the traditional back to school post. But well, nothing is traditional or normal in 2020.
Back to School Musings My Life