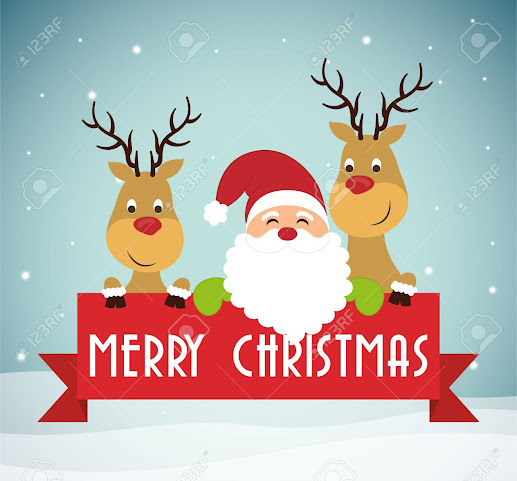 Merry Christmas! I hope everyone during this very different holiday can find tons of joy, love and happiness. We may need to be more creative in how we spend time with our families this season, but it can still be memorable and wonderful.

I know, these last few weeks haven't been the happy train for articles and reviews, but I am really excited for the future of this site and 2021 will be the best year ever. We still have about a week left, and during that time there will indeed be articles and reviews to keep you entertained.

For today. I am offering up a repost of a little holiday humour piece that I wrote all the way back on December 23, 2011. Little did I know at the time, it was only three days before I officially would become a dad, as Everett decided to come bouncing into the world about 13 days early.

Anyway, enjoy one of the last pieces I wrote before becoming a parent.

It was the spookiest time of the year.  She couldn't quite explain it.  Every time December rolled around, complete strangers would start calling out her name.  She would pass the streets and people would wave and smile, "Mary Christmas." She would buy something at the store and the cashier would just call out her name while she left, but wouldn't have anything else to say to her when she came back.  She would go to the doctor's office or bank or the pizza place, and they'd greet her by saying her name over and over as people entered.

For eleven months she'd get a 'hi' or a nod, but for one month, everyone seemed to know who she was.  They seemed to love calling out her name.  She appreciated the kind gesture, but she wished she knew how they knew her name.  It was disturbing.

She remembered in grade school how teacher's warned against wearing clothes that had your name on it.  It would then allow strangers to address you by name and trick you into thinking they knew you.  It was this memory that got her to start investigating the clothes she wore and the bag she carried.  Was her name somewhere on her clothing or accessories?

Or was it some huge practical joke being perpetuated by her friends and family?  Was it some giant prank that would eventually be revealed?  But why would they let it drag on for so many years?  Why did it always happen in December and usually end around the 26th of the month.  Why?

The most disturbing thing started to happen at the department stores.  She would walk in to discover a huge banner with her name on it.  How did they know she was coming to the store that day?  They seemed to have hired someone who struggled with the English language, because they misspelled her first name.  Actually, it was odd because every store misspelled her first name.  Merry Christmas.  She wasn't sure how they would have messed up such a simple name, because she never knew a girl with the spelling of Merry.

The spooky trend continued as other establishments started putting up banners and signs that just simply said her name.  Of course, they seemed to have got her name from that department store where they didn't know how to spell.    Merry Christmas -- sheesh, how hard was it to spell Mary.

Mary started to get used to it.  It was cool that the people of the town knew her name.  They felt the need to acknowledge her.  She was a quiet girl and didn't have many friends.  She worked at a cleaning company where they cleaned a few of the local office buildings.  She did the job when everyone had gone home, so she rarely got much social interaction.  Though at first it was odd and disturbing to have complete strangers calling out her name, she did appreciate getting recognized.  It felt nice to have people take the time to know her name.  She started considering all these people as her friends.  She liked feeling popular.

The scariest moment came when she was watching a newscast on the 24th.  It was being broadcasted on a channel in the big city, which was at least an hour away from her home.  Yet at the end of the broadcast, the newscaster stared right at her and said, "Mary Christmas.'

That was it.  Nothing else.  He just said her name.  It sent a chill down her spine.  It was nice that her hometown was acknowledging her.  But it was getting downright petrifying that people from other cities were just randomly saying her name.  It felt like she was being haunted.

She started flipping to other channels to see if they would call out her name.  She had to find out if this was something that would be sweeping the entire country.  Maybe even the world.  More importantly, she wanted to know why it was happening.  How did they know her name?  Why were they just saying it to her without saying anything else?

She came across a late night talk show.  It happened again.  Right after the host said a few jokes and caused the audience to break out into laughter, he pointed to the band and they started playing some lovely music.  He then said he would be taking the next week off.  He stared right at her and said, "Mary Christmas and Happy New Year."

Behind him a banner was lowered and it was the famous misspelled version of her name, "Merry Christmas" along with the other thing he just said "and Happy New Year."

How did a talk show host from New York know her name?  And why can't he spell either.

And maybe even more importantly, how did he find out about her cousin?