'Dick Johnson is Dead' Review: An Uplifting Story About Loss and Grief 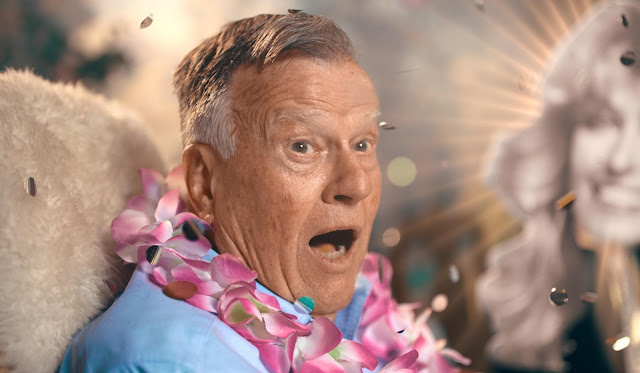 Four Star Rating: ****
Starring: Dick Johnson, Kirsten Johnson
Director: Kirsten Johnson
Producers: Katy Chevigny & Marylin Ness
Cinematographer: Kirsten Johnson
Editor: Nels Bangerter
Production Company: Big Mouth Production
Distributed by: Netflix
Genre: Documentary, Comedy
Rated: PG-13 - Thematic Elements, Macabre Images
Release Date:  October 2, 2020
Run Time: 89 minutes
Art is one of the true treasures of a culture because of the multiple things it can do besides just entertain and please, Art allows us to explore the bigger challenges and questions of life. Art is a way to work through hard issues and act as a form of coping for both the artist and audience. Roger Ebert often called movies 'empathy machines' because they allow us to connect, relate and understand people that are very unlike ourselves and opens us up to a fresh perspective. Great art allows us to be interlocked with the soul of the creator for a short time that then gives us better understanding of ourselves.

The documentary film Dick Johnson is Dead is great art.

Documentary filmmaker Kirsten Johnson crafts a unique film where she comes to terms with the inevitable passing of her 86-year-old father as well as losing him to Alzheimer's disease by staging elaborate scenes of how he could die. This sounds very dark and morbid, but her father, C. Richard Johnson, is so full of positive energy and is such a charming gentleman that there is a playfulness and joyfulness to these sequences. You also get a dose of Hollywood magic as they show how they stage, construct and shoot the death scenes through practical effects and stunt people.

The whole enterprise is a way for Johnson to face the reality of her father's mortality and this is designed to be one of the last things they can share together. Each death sequence is executed with good nature and humour, because those are defining traits of the main people involved. The true joy is the interaction and day to day of the father and daughter navigating this stage life together. You get a real sense of a legacy left by the father as he engages with various people throughout the film and his kindness and empathy touches each person. The movie ends up being about a great and compassionate life lived rather than the impending death it is sold on.

The novel premise of staging numerous fake deaths is the hook, but the soul is the bond between a daughter and father that explores a happy life despite it being soaked in sadness and hardships. We get to learn about the man, C. Richard Johnson who is optimistic, kind, bright, compassionate and obviously, a good sport.

The movie looks at both how Kirsten Johnson deals with her father whose memory is fading, but also what this struggle means for him as he experiences major changes like grieving over the death of wife, having to sell his final car, move out of his house to live with his daughter and come to terms with no longer being a working psychiatrist with a practice. The picture shows that his loss of freedom is a challenge that both the father and daughter must wrestle with every day. Despite delving into this heavier material, the optimistic and hopeful man at its center keeps it inspirational and uplifting. We can celebrate life and find humour in all stages.

A great movie will often trigger personal memories and feelings. I was reminded of 2011 when my father-in-law was dying of a cancerous tumor in his brain. We visited him at the hospice in Toronto each weekend and we never knew what to expect when we went to see him. One time he told us that he had spent the morning travelling British Columbia and another time he had said he was building a collection of doors and another time he commended us on having a dog because he was an excellent 'fart detector.' On Father's Day weekend, we took Emily's family on a picnic to announce that she was pregnant, and when we got back to the hospice, we had asked him if he remembered what the big news was that we announced. He responded that he discovered that he could freeze time. All these things could be perceived as scary or sad, but we decided to take them as funny moments.

It was that same year that my grandma passed away at 96-years-old. I remember visiting her at the hospital and being devastated by how physically frail she looked. Even though she looked to have been through a war and was only several weeks away from passing away, she still had a mind like a steel trap as she could rattle off all my sibling's birth dates, Emily's birth date and the day we got married. You realize this is more impressive because she has 13 children who all had their own kids and many of them had kids, and she knew every single one of their birthdays. You need to celebrate those simple moments, especially during times of impending death.

I started writing a novel to process both of those deaths. It was a supernatural horror story, so not directly related to either. The story was a way of me working out my feelings and processing my grief. The novel remains unfinished, but as a tribute to both, I intend to finish and publish it.

Johnson uses this documentary to process a lot of her feelings and thoughts, but like all great works dares to say so much more. It is a celebration of one man's life, his devotion to those that he loves and about gracefully coming to terms with the now. It is about the different ways we handle the challenges of life as it explores religion, community and filmmaking. Johnson uses some old home video footage to show her mother who also struggled with Alzheimer's and some happy moments from the past. While the movie is structured by the project they work on together, it is all elevated with their sincere and authentic interactions together that are a true window into their relationship and who they are as individuals.

Dick Johnson is Dead is a deeply personal movie. When a great work of art is this deeply personal and honest it then also becomes universal and connects with a broad audience in a meaningful way. The things that deep down drive us or the fears that haunt us are what makes us human and when we are open about it like this movie then we become a community. Johnson explores these issues of loss and death with a dark humor because being able to laugh and being creative during difficult times brings joy and light upon the darkness. It is how we continue through life and grow to be better.

We just went through a year where learning to smile and laugh has been the best way to make it through every day. For that reason, this little piece about one person coming to terms with the eventual death of her father may be one of the true encapsulations of 2020. It is intimate yet universally profound like all great art.