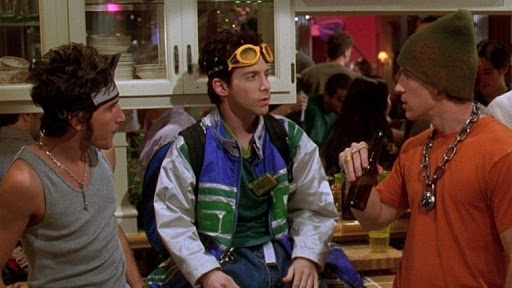 There are a few times a year that someone I know will bring up a movie they recently watched and try to get my own opinion on it. The problem is that I will watch anywhere between three to five movies a week, and when theatres were open sometimes it could be all the way up to seven or eight. You tally up those movies for an entire year and realize the movie I'm being asked about came out in 2015, so you can see why my exact feelings on that movie are blurry. at best
I usually can remember if I recommended a movie or not, or remember if it made or was close to making one of my year-end lists. But when I get challenged on why I did or didn't like something, it can be much harder since there are hundreds upon hundreds of movies watched in-between that experience with the picture.
Usually if I really connected with a movie and loved it, then I still have some of the glowing aspects burned in my memory and soul. But for most other movies, I mostly remember I liked it or didn't like it, and it is much harder to craft a clear narrative of how I got to that conclusion if it has been years since my last watch of it.
This is ignoring that there are some movies where I'll see the title of the movie and not remember if I'd seen it, and only know that I did because I keep a spreadsheet of my star ratings for every movie I review. Simply put, I am not the best walking resource of my opinion of movies unless it was something that I have significant experience with it.
I realize that in the last few years almost all of my public record of my movie reviews are only on The Movie Breakdown podcast with a few exceptions where I wrote a review too. If someone wants to know how I felt about a movie, I have stumbled upon the revelation that it would be much easier to quickly reference a written review than it would be trying to find and listen to a podcast episode.
Now, there are many reasons to start writing reviews again, and the main one is to have something substantial to draw in movie fans to this site that is claiming to be a movie site. Plus, I claim to be a writer, so the best thing to prove that is to continue to write. It will also help to be accepted into a critic's association if I have both the podcast and the written reviews. But on top of all those great reasons, having a very quick reference guide for the times I am asked for an opinion better than 'did you like it or not' then I could quickly scan a review to jog my feelings.
My hope over the next several years is to not only have review for every new release that I see, but also have reviews for every movie that I've discussed on the podcast or have seen in the last several years that never got a proper written review. On top of that, I will continue to review older movies and especially movies considered classics that I somehow at this point in my life have still not seen.
This is the week that starts. Promise. This is real.
The plan is now to review a few Oscar nominees for the next two weeks. After that we will kick-off the MCU and Disney animated review series where I will write about every single one in chronological order. I will also start going back to when I was a professional movie critic in May 2012 and in chronological order start reviewing some of the major studio releases. On top of that, throw in some other older movies that may have some relevance to the movies I am exploring.
The time for this to become the movie site with a twist that I've been hyping is right. . . now.
Blog Blog Address Hype Movies Musings