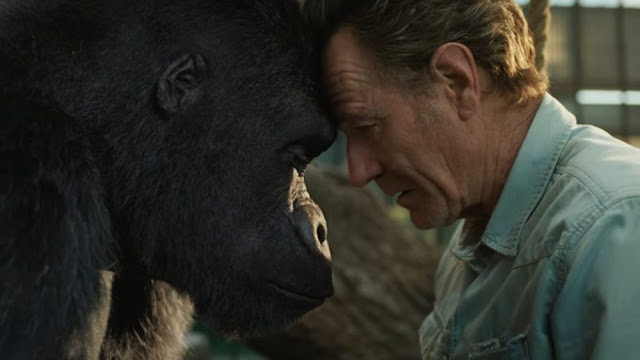 Why do you even stick with it?

Maybe you haven't. Maybe you just accidently hit an old bookmark when you meant to check out A.V, Club. I hear they actually write about and review movies on a daily basis.

But do they ever resort to posting cute kid pictures when they haven't had time to write something on the site for the day?

Do they ever write quick pieces about positive thinking when they know that they only have ten or so minutes to devote to the site?

See! This is where I am ahead of them.

This is also one of a thousand reasons that they have a million times the regular readers than I do.

Anyway, I mentioned that the plans along with my MCU and Disney Theatrical Animated Feature series -- that are totally things that will happen on this site -- was a plan to start going through many of the movies that have been released since I started professionally reviewing movies back in May of 2012.

I also said that I'd also be reviewing even older movies that may have some similarities to movies I'm reviewing as I try to create a narrative of how movie have evolved and changed over the decades. Part of the reason I want to review all the MCU and Disney Theatrical Animated movies is that I believe both helped construct how we view movies today and what gets greenlit now. They were the game changers and taste makers. May 2012 is when The Avengers was released, and it may go down as one of the most influential movies of all-time.

It is becoming clear that the domination of Disney hasn't only influenced big blockbuster event movies, but how major studios' create and release all kind of movies. The view of prestige and Oscar hopefuls have also been drastically affected and what is considered an awards-worthy movies in 2021 is very different in what was considered one even a decade ago.

I'm sticking with the plan to review in chronological order the MCU series movies and every Disney Theatrical Animated features. On top of that as I teased last week, starting in May 2012 I am going to review many of the releases from week to week that are available in streaming services that I have.

In order to look at how Oscars have changed, I thought I'd review a few of the Oscar nominees from this year that are also available on streaming services. Since the Oscar are very soon, I was going to focus on a few of those for the month of April before kicking off the other series in May.

On top of that, I will also write a few more musings on major movie news items and drag out that blasted fiction series.

So yes dear readers, the reviews and more are truly on their way.