October 04, 2010
I've written a fair bit about the outright racism and narrow mindedness being showed towards American Muslims. While I think I've made my own feelings, beliefs and opinions extremely clear, thus don't have much more to add, I did receive a very interesting graph from a friend of mine. Even though I'm not one for graphs and stats particularly, I think it does at least visualize exactly what I was writing about in regards to the unfair treatment towards Muslims. It helps demonstrate the point that even though Al Quaeda considers themselves Muslims (even though they about as Muslim as Ted Phelps is Christian), that does not mean at all that Muslims are Al Queada. When you look at the religion that spans the entire globe, it is rather silly to peg all those people as being the same as a small group of complete radical loonies. I thought, it was a worthwhile chart to bring to the blog, because it helps present information that a lot of people are still in rather desperate need of viewing. In order to see all it circley goodness in larger form, click it for its own larger window. 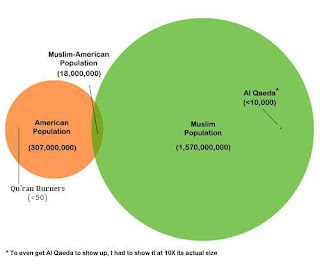