My Observations of My First Two Weeks of Fatherhood Plus Pictures!!!

January 07, 2012
I really didn't know what to expect when it came to being the father of a human baby. I knew my life would change. I had several people warning me about how exhausting it would be or how all semblance of free time will instantly evaporate. This was a little disconcerting since running my own business already did a good job of limiting sleep and booting free time out the door.

I think all the warnings about the hard work of parenting caused me to conjure up some of the most disastrous images possible. I started imagining parenting to be something like a fiery dragon scorching our roof while zombie racoons gnawed at our windows while in our basement a volcano suddenly formed to shoot out lava coated brussel sprouts while a wall of dirty diapers block our every entrance. I was expecting something pretty daunting. I'm not sure if it was the hyperbole spouted about the hard work of parenting that just blew things up, but I'm actually finding this whole deal relatively easy to handle.

I realize it hasn't even been two weeks yet. My wife had a grueling labour, which was hard for me to witness, and then we had some other draining complications after the fact (all of which will be chronicled in the coming weeks in my parenting column), so I'm not claiming all things to be roses. I am saying things haven't been the massive energy suck that I expected.

Everett sleeps really well. He feeds great, and already has his birth weight back. He basically wakes up to eat and be changed, and then visits for a short bit then falls back to sleep. He'll even happily lie in his bassinet while he is awake. He'll sleep through a barking dog, and he'll do minimal fussing. His only real complaining is when he gets changed, but I wouldn't like it if people I knew for a short time started pantsing and exposing me every three hours either.

I want to make it clear I don't take any credit for this. This has nothing to do with my parenting skills. I don't have a clue what I'm doing. All the praise needs to go to my son being incredibly laid back and any possibly super powers my wife may possess.

My son is really easy going, and has made things much easier than I could have expected. Things have gone so well that I ended up returning to client work at the start of this week, which is far earlier than I thought I would be able to do. By the end of the week I was doing a full work schedule plus some of my side job. This is thanks to a baby not being too demanding and my wife who is magical.

I know it is only two weeks. I expected the "ease" to be based off this fact. Two moms visited us today and essentially confirmed our suspicion that Everett is super chill and we've got it really good. This still doesn't mean it will last though. We have teething and countless other joys to look forward to coming along. As of now, we've been handed one great deal.

And my son is awesome.

Of course after saying all this, he has had trouble settling this evening. So, I may have just jinxed things. Or it just has to do with eating Indian food today.


But let’s focus on the awesome. Like cute pictures of Everett. 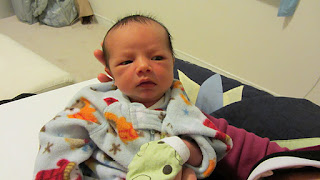 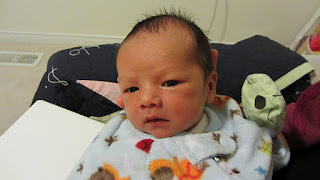 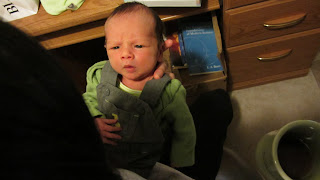