To Answer the Age Old Question if Dick Clark Ages. . . 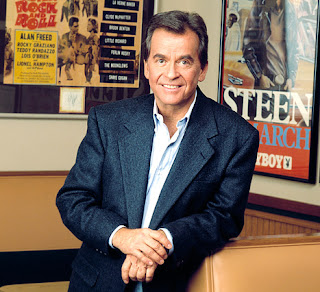 He passed away yesterday. And here I thought, he was going to truly be the first one to live forever.

American Bandstand was at its peak before I was into music, because either I was non existent or paying more attention to He-Man. I realize he played a significant role in blending music with television, and many consider him the one that paved the way for things like MTV or American Idol. Though, I'm too lazy to verify such claims, I do know the man was a legitimate pop culture icon.

I knew him better as the guy who seemed to never age, and was the host for the big New Year's Eve TV specials. Specials that I watched for about a minute every year, so that I had something to count down to the next year. The man had a pretty impressive streak for being a host for decades, and even made appearances for the last few years even though he'd been replaced by Ryan Seacrest. Ryan wishes he'll have the longevity of Dick Clark.

My childhood memory of Dick Clark was when he was a host of Candid Camera with Ed McMahon. As far as I knew, this was the show that established both men. I was way off and stupid for thinking it, but I was also 8. And again, focusing my attention on the muscle-bound guy with the talking cat. But I thought the show was awesome (again, I was stupid), and remember thinking Clark was a warm and fatherly host. He had one of the most memorable voices in all of entertainment, and one that I always found comforting.

Clark had a pretty large reach in the entertainment world. He hosted some of the biggest specials that didn't just land on New Year's Eve. He played a big part in establishing some of the most legendary musical acts. He was a familiar face for several generations on countless TV programs. The man has been a TV institution, and he'll definitely be missed.