May 22, 2012
My Crosby tribute is now the ninth most read post ever on my blog.  Almost all of you are likely asking, "So what?"  This is because you're well-adjusted and normal human beings that aren't obsessed with things like page views.  But I am not blessed with that kind of normal, but instead cursed with the kind of geekery where I care about such stats.  Not only care, but they can even emotionally move me.

But why am I emotionally moved by Crosby's tribute being the ninth most read post ever?

It means that my tribute to my beloved cat was viewed by more people than movie reviews, tributes to celebrities, opinion pieces on major news events, and basically, almost everything I've ever written on (except for eight other blog posts).  The memorial of my cat is one of the most read things that I've ever written.  For me, that is probably one of the coolest ways I could ever honour a cat that did a very fine job of bringing small joys to my life.  I'm going to miss him, but I am happy his life was read by hundreds of strangers.

There are three specific reasons that I am really happy the Crosby post got so many views.

1. The higher views are going to allow the Crosby post to rank higher on Google.  It will start being seen as an authority on things "Crosby".  The Crosby post has also been linked to by several sites, which will also cause it to do well in page rankings.  Why is this cool?  Well, I get a kick out of the post being read by people who were searching for information on a musician or hockey player.  It makes me giggle that it will be discovered by people who never had any intention of finding out about him.  I warned you that my happiness can come from odd and geeky places.

2.  Crosby's tribute was read by many people who never ever met him.  It was read by people who didn't even know he existed until he passed away.  This was a cat that most of these people had no emotional connection to, but they still cared enough to want to read a tribute about him.  This proves to me how valuable and wonderful pets can be.  People were able to relate to my family's loss, and they cared enough that they wanted to read about one cat's life.  This shows that I had a certain bond with strangers.  These were people who realized a pet isn't just a pet, but really is a key part of family.  The Crosby tribute was my third most read tribute to a deceased living thing, and the other two have the huge advantage of being linked on major mainstream sites (and being about well-known figures).  There is something cool about a cat garnering more attentions and views than almost every other celebrity and major figure that I've honoured on my blog.  The tribute still gets a fair amount of views on a daily basis, so it may even surpass the ninth spot.

3.  Cat's don't get fancy memorials.  Pets don't get funerals.  It just isn't considered something accepted in our society.  There really isn't a lot of ways you can honour your beloved pet.  This tribute was my way of paying respects and showing love to my cat.  A cat that showed me hours of affection.  A cat that lifted my spirits numerous times.  I owed it to him.  This blog post was a memorial and his funeral, and my way to send my cat off to the big counter in the sky where he'll eternally snag chicken wings and put holes in plastic bags.  It is pretty awesome that this tribute was then read by so many people.  My cat has been immortalized on the internet.  His memory will linger in the minds of countless people.  That makes me happy.  I did the best I could to keep the memory of Crosby alive, and it has paid off.

I am also touched that the Crosby tribute has been linked and shared by several websites and people.  I am very thankful for the many condolences.  I've loved the many stories that people have shared about either Crosby or their own cat.  It has made this last week much more bearable.

Thank you everyone once again.  Thank you for making the Crosby tribute one of the most read articles that I've ever written.  That is way too cool.  Or at least, it is cool for a big geek like me.

Once again RIP Crosby.  Exactly one week ago we had to make a very difficult decision, but we will always love and miss you. 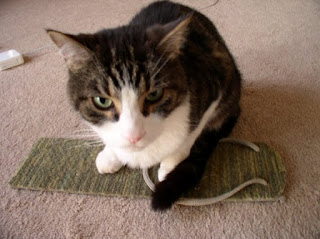