August 04, 2012
It seems my post hoping for some gold today worked. 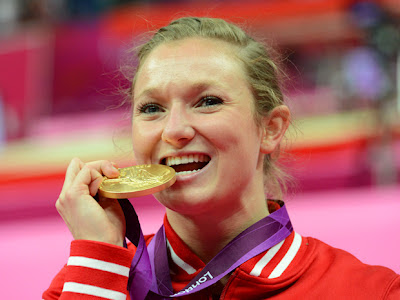 I'm thinking Rosannagh MacLennan must have just finished her daily reading of my blog and thought, "why yes, a gold today would be a nice thing for Canada.  I'll get one of those."

If this is the case, I apologize to Rosannagh.  I put all the hope and hype on your team mate and totally ignored you.  But you made me the fool.  I'm fine with that.  I am also a fool for mistakenly thinking CTV   created a video package of Karen Cockburn when it was you, and so I thought she was our biggest hope.  Cockburn did just fine with a fourth place.  I'm sure my saying that doesn't make Cockburn feel much better.

MacLennan put on a world class performance and not only took a medal but won the competition.  This further shows the world that Canada is really good at jumping on bouncy objects.  My son practices on my stomach quite often.

Canada is really breaking away from their Beijing performance.  We now added gold to a just fine and dandy haul of 8 medals, thus smoking the previous Olympics so far.  This helps make up for some of the pain of losses from a few of our other hopefuls today.

I do want to say that Paul Findlay doesn't need to be apologizing to Canada.  I know she had high hopes.  There was a good chance she could have medalled.  She was ranked number one in the world before going down to an injury a year ago.  This was her first race back, and maybe she rushed things.  The fact is she was having an awful day, but still completed one of the most gruelling races ever.  I'm proud of her.  She doesn't need to get any forgiveness from my couch potato ass.

MacLennan did make Canada's Saturday a golden one.  I know it won't be our last.  Congrats Rosannagh MacLennan for earning medal on one of the cooler things in the Olympics, trampoline.

Yes, I can make jokes about winning in something that I jumped around on as a kid.  Yes, it is a great kid’s game.  But my best move was bouncing around on my ass.  Not really gold medal worthy.  There is talent making incredible jumps on a trampoline.  I can hardly walk on that thing.  It is a great sport to watch, and MacLennan does it better than almost anyone else in the world.  Especially today.

Now, time to go watch our Canadians athletes continue to be awesome, and for me to try to find out more ways to get paid to write about Canadian athletes on an American site.
Link Media Musings Olympics Sports