RIP Tony Scott: A Man Who Probably Made a Film You Really Liked 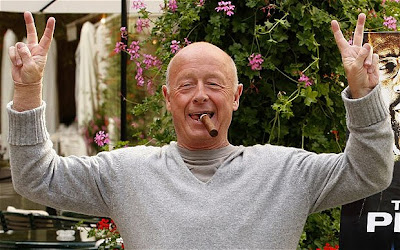 I'll forgive if you don't know who Tony Scott is.  But I'll be absolutely stunned if you aren't aware of any of his work.  If you're any kind of fan of film, then you also likely know his brother, Ridley Scott.  Tony, like his brother, was also a director, even if not as well known.

Sadly, Tony Scott committed suicide yesterday after jumping off a bridge.  The reason seems to be that he had inoperable brain cancer, which is an awful affliction to have.  I don't know a lot of Tony Scott, and so I can't properly eulogize him.  I do want you to quickly check out a small tribute written by John Scalzi on his blog.

I wasn't really aware of Scott's career, but I did know and love a lot of the films he directed.  I'd bet the slightly expired can of mayo in my fridge that the majority of you also enjoyed many of his films and watched a few repeatedly.

Raise your hand if you never heard of Top Gun?  Now, raise your hand if you only raised your hand before to be an ass?  Yeah, I thought so.  Top Gun is one of the iconic '80 films.  Even if you never saw it, you definitely heard of it, and perceive it to be one of the star making films for Tom Cruise.  It is likely Tony Scott's most well-known film, but he has made many others that I'm sure many of you love.

Scalzi in his article mentioned True Romance and Crimson Tide as his favourites.  I wouldn't argue against either being great films you waste an afternoon away with.  Tide is one of those films that you always stop flipping through the channels and are compelled to at least watch ten or so minutes.  It was a great suspense films, and had marvelous performances from Denzel Washington and Gene Hackman.

But Scott has made several films that prove that he made smart action/thrillers.  He wasn't trying to make the greatest films in history or even Oscar contenders, but he did make fun actions films that were more sophisticated than a lot of the typical fare.

Spy Game was one of those films that presented a lot of the classic action and suspense tropes you expected, but also demanded that you think.  I remember watching that film several times with my roommate of many years ago, and for a while, it was probably my go to "I can't sleep and I need something to watch to waste away these late hours" film.  I also think this is the movie that helped me start to respect Brad Pitt as an accomplished actor, and reminded me why Robert Redford is one of the most respected actors over the last several decades.  They created believable and powerful characters, but it was the plotting and direction that really made this a stand out thriller.  It is smart and engaging, but more importantly, extremely entertaining.  There really aren’t too many other films that have this style.  It was scared to be critical of the government or offers up some that delicious shades of grey.  This is definitely another, "I've stopped flipping the channels, because this movie made me forget what I was looking for."

Enemy of the State isn't a critical darling, but I remember having a blast when I saw it in the theatres back in 1998.  I can't claim it was a star making film, because Will Smith was already a box office hit at that point.  I remember it being a film that offered up the action and thrills, but also had a more intricate plot to follow than the normal blockbuster films of that year.  It also wasn't a film that just offered up twists for the sake of having twists.  The plot points were thought out, and the revelations were satisfying.  It has been over a decade since I've seen this film, but I do think it is one of the truly underrated action thrillers of the 90s.

Speaking of underrated, The Last Boy Scout has never been called a classic.  It isn't Bruce Willis's best action film, because Die Hard will always claim that crown.  This film is far better than critics ever claimed.  I think it was grittier and more violent than people were expecting.  Maybe it had more shades of grey than the audience wanted.  The film is an enjoyable action ride.  I think it is one of Willis’s best performances outside of Die Hard.

Ridley Scott is known as being an amazing visual director.  His brother wasn't any slouch either.  He didn't do any films with epic scenery or massive scope.  He did create enticing and visually impressive scenes that fit well into the world that was needed for his films.  He didn't do films about empires or new futuristic worlds.  He usually stuck to one city or a submarine.  He still shot beautiful scenes that triggered emotions and helped you get engrossed into that world.  He really was underrated.

I haven't mentioned all his films.  I'm sure there are other ones that you own and love.  I encouraged you to Google him, and see what films he created that you love.  Then you know, rewatch them.  That really is the best way to the honour the memory of a great director.