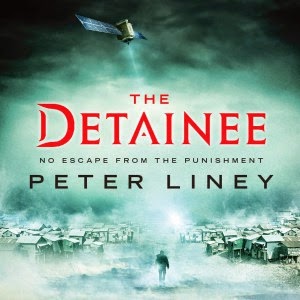 Scott is really excited about a future where older people get shipped off to a desolated island. I'm really glad I'm not his father, because my history with islands isn't good. In this case, it seems like the love more comes from a recently announced movie. He explains more below.

For those of you that are getting a little tired of the sexy teen dystopian book trilogies turned movies, prepare to get excited. Your dystopian future has just been shaken up by the writing of Grant Pierce Myers (one of the writers who did the screenplay for The Maze Runner) who is signed on to pen the movie adaptation of elderly dystopian book, The Detainee. It is a time when there is a non-stop flow of the same style of film that attempts to sell us on the stories of ‘the chosen one’ or ‘the one person who could unite them,’ all the scenarios contain the hope placed in the hands of hormone injected teens, who, no doubt, have some kind of romantic entanglement.

The Detainee focuses on a future where the elderly have been banished by the youth who see them responsible for the awful conditions of society. It is this demographic protagonist shift that could end up adding a breath of fresh air to the sub-genre as well as shaking things up a bit. Good things can happen when studios take chances on deviating from the established path. When I saw the teen dystopian film The Giver in theatres, I was seated amongst a crowd of older theatre goers who had no doubt been drawn in by the fact that Jeff Bridges and Meryl Streep (who did not get an Oscar nomination for appearing in the film, an oddity from the Academy) were attached.

It is this audience that is commonly neglected by film executives as they plot out their strategic releases. It is also this audience that has proven multiple times over that they can give long legs to quality films. Both Gravity and Gone Girl are glowing recent examples of the hunger that mature crowds have for reasons to get a sitter for the kids and purchase the mammothly inflated costs of butter flavoured theatre popcorn. This year’s unexpected success story has been Kingsman: The Secret Service, which threw onto theatre screens an R-rated film that had both young and old talent, and created curiosity around seeing Colin Firth kicking people’s asses. As one older audience member put it after the film was done, ‘it was cute.’ That’s not the phrase I would have chosen, but I was impressed to see that different demographics were able to groove to such a film.

Who knows if this movie will ever get made, or if it will end up in limited release. It may be an instant flop, and could reinforce the notion that the target audience should always be young people. There is a chance that it could come and go without having any impact on the cinematic landscape, but it also could be the kind of film that instantly alters strategies of competing studios. Regardless of how it all turns out, it is simply an encouraging sign that some people out there see diversity in how stories are told as a good thing and a risk to take.
Dystopian Fiction Movies News The Detainee