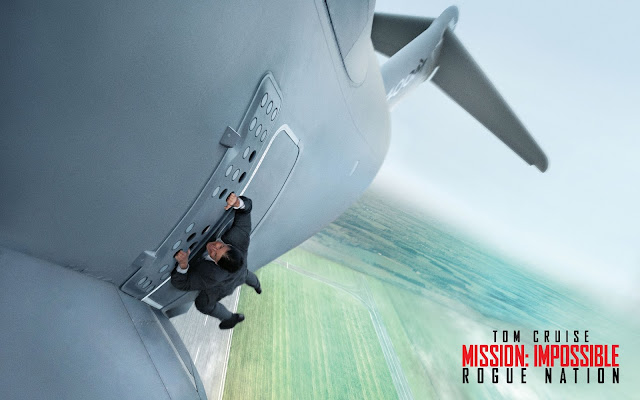 When it comes to big stunt, globe-trotting, special effects action spectacles with a liberal dosage of tongue-in-cheek humour, Mission Impossible scratches that itch far more effectively than Fast and Furious. I'll admit the car smashing through the window of one high-rise into another high rise was a pretty great visual in Furious 7, but it can't really compare to Ethan Hunt desperately clinging to a flying plane (which from everything I heard was a legitimate stunt without any CGI assistance). The fact it is a human on his own doing the dives and leaps and rolls rather than someone in a decked out sports car is what makes it a great thrill and gives the action sequences higher stakes. It is all fantasy and ridiculous, but Tom Cruise throws himself into this role and in recent years has been able to be both kick-ass and make an ass out himself with equal skill. If you want any example of his pure dedication then watch him run, because nobody takes it more serious than Cruise. Not too much running in this trailer, but a pretty fantastic array of action sequences and stunts, and looks to be a pretty fun popcorn muncher for the end of July.

The plot in these type of movies are completely secondary. We know it is all just an excuse for some exotic locales, ear popping jams, and sequences that defy physics and reality. Though IMF having to battle its evil doppelganger sounds fun and Ethan seems to be on the run, which is always best for this series. I also am intrigued to see if Alec Baldwin turns out to be the devious mastermind behind the Rogue Nation that each trailer has hinted. But again, all that is just secondary and the real show is what massive stunts are they holding back from the trailers that will drop all the jaws on opening night?
Mission Impossible: Rogue Nation Review Tom Cruise Trailer