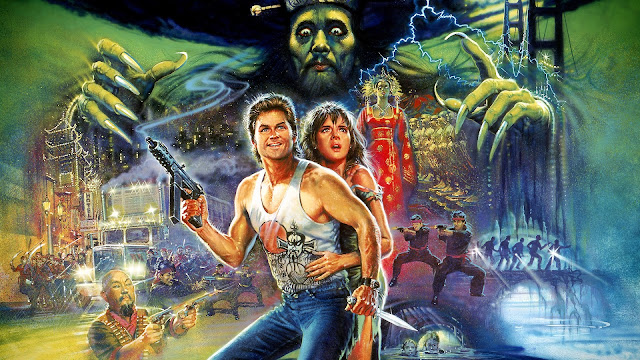 In Earth-shattering news, a movie studio has greenlit a remake of a 1980s picture. Our world may never recover as it is followed up with the Rock, who is fresh off starring in the $54 million opening weekend San Andreas, targeted for the lead role. Such information would make one think it must be a major beloved box office hit that is being eyed for a redo like Top Gun, Lethal Weapon or Weekend at Bernie's. Instead, Hollywood Reporter has announced that Dwayne Johnson is pegged to play trucker Jack Burton ready to rescue enslaved women from a 200 year old sorcerer in John Carpenter's b-movie inspired and definite campfest, Big Trouble in Little China.

This movie definitely has been shown the love by many movie fans and is apparently even one of Johnson's favourite movies. I'm a little baffled that Twentieth Century Fox actually believes this picture can be a major hit with modern audiences. What likely happened is a studio executive went on a nice stroll in the park and overheard someone mention the movie. The executive whipped out a cell phone and called a fellow executive to check out IMDb and find out more about this potential franchise launcher. The buddy gleefully announced that it was directed by Carpenter, who in the last decade has seen his movies like Halloween, Assault on Precinct 13, and The Thing get remakes and also Escape from New York be planned for one. So obviously this is evidence that everything the director has done must get a renovation and open the door for seven sequels and a theme park ride. Then the pal checked out Box Office Mojo and saw Johnson's latest movie won the weekend, and they found their star. Both executives promised each other high-fives in the future and celebrated over the 50 foot solid gold statue that this new movie was destined to bring.

Big Trouble in Little China is one of many entertaining and innovative movies in John Carpenter's portfolio. A portfolio that is highly underrated because almost all of it is in genre fare. But greenlighting this remake further shows movie studios glaring tone deafness when it comes to finding past movies to be remade into massive box office smash hits.

Dwayne Johnson is the hottest action star in Hollywood. He is proving to be a big box office draw and helped draw bigger crowds to both the G.I. Joe and Fast & Furious franchises. He is a genuine star and is the choice when a studio wants to launch a big action franchise. If his name is attached, it is safe to assume a studio thinks the movie has blockbuster potential.  That is the same reason why wanting to attached the Rock to this movie proves the whole thing could be a colossal mistake.

The movie is a definite cult classic, but one of the defining aspects of the cult classic is that it is known and loved among a loyal but small group. In the case of this movie, it was a pretty major flop when it was released in 1986. A time that was only a few years removed the type of martial arts movies that it was trying to pay homage to. The martial arts genre definitely exists now but it is in movies like Crouching Tiger, Hidden Dragon or Raid, which are drastically different than what was popular in the 1970s. A time you may notice is even further away now then it was in 1986.

On top of that, this was a picture that mixed in the martial arts with an absurd fantasy adventure that was flavoured with a late-night creature feature vibe. It had purposefully corny dialogue, an increasingly bizarre storyline, and some light 1980s racism (which in modern terms means outright offensive and lawsuit worthy racism). It was odd and goofy and very un-mainstream in 1986, and it would be even more absurd and multiplex unfriendly now.

In the 1980s, studios were still looking for big tentpoles, but they were willing to take some risks on mid-budget genre fare that allowed them to have a diverse slate of pictures. But now, the major movie studios want almost everything to be a tentpole (which means there is no longer any room in the tent) and the focus is on really big returns. I don't see how a bizarre and goofy tale about a trucker thrown into a mystical and hidden kingdom where he must fight an evil sorcerer fits with big studios objectives. There isn't really a way to properly rework this from its b-movie roots and turn it into a big summer blockbuster that will send the mobs running with hands waving their ready to spend cash to the multiplexes.

Yet for some reason studios currently seem to be on a bit of a "reimagine the B-movie" kick with movies like The Blob, Flash Gordon, and the aforementioned Escape from New York all greenlit as well.  There is a charm and energy that will get lost when a bigger budget gets poured in, and the studios will feel the need to meddle more and the special effects will need to be more polished and visually stunning. Big Trouble in Little China just isn't a story that gets better with a state of the art technology and definitely doesn't need a studio tweaking it to be more mainstream. It wasn't mainstream in 1986, it is less so now, and all its cult classic appeal will be lost as a big summer blockbuster wannabe.

I can see the argument that Mad Max: Fury Road was spawned from a cult classic and turned into a spectacular movie. Except this ignores the fact that the previous Mad Max movies were also hug box office hits and the action sequences from the past movies were inspirations to countless action pictures. It already has a much larger footprint in cinema history and while it is bizarre, it never aspired to be a 1970s Grindhouse style cheese factory like Big Trouble in Little China. The other thing is that Fury Road is the best movie of 2015 and was a massive critical hit, but it wasn't a massive box office smash (it was decent). It has the appeal of big cars smashing into each other that is all trendy cool, while I don't see any signs that Fu Manchu mystic villains desperately wanting a wife are hyping audiences.

While I don't trust studios to allow this to be anywhere near as entertaining and batshit insane as the original, there is reason for a little bit of hope with the Rock casting. His involvement does mean false and inflated expectations, which also may translate to less creative freedom for whoever may direct this. Even writers Ashley Miller and Zack Stentz have proven their talents by scribing the really good X-Men: First Class, there isn't any evidence they have experience doing a tongue-firmly-in-cheek actioner. But Rock has the charisma, charm, and sense of humour to be great casting for that type of movie. He has proven that he can effectively deliver the corniest of action dialogue in movies like Hercules, Furious 7 and San Andreas, and he does it in a way that doesn't belittle the material but also amplifies the sense of fun. He is a worthy replacement of Kurt Russell and will be just as suave and charming while embracing the campiness.

I can't possibly see a world where this thing actually turns out to be a hit. I also don't think they will be close to capturing the magic of the original. But the Rock can still make the disaster a fun one to watch.
Big Trouble in Little China Dwayne Johnson John Carpenter Movies Musings News