If Jason Bourne Had the Munchies In-between the Ass-Kicking 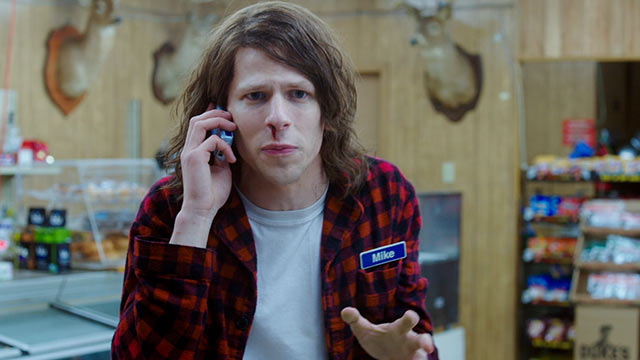 American Ultra, based off the two trailers so far, is the stoner comedy take on The Bourne Identity, and considering popularity of comedies like Pineapple Express or Knocked Up or anything starring Seth Rogen, I'm surprised this concept hasn't been tried before. Jesse Eisenberg wouldn't be my first pick as the stoner turned kick-ass government agent now on the run, but he looks to be having fun and throws himself into the role. Of all the (unfair) criticisms of Kristen Stewart lacking emotion and passion, it does make her a great choice as the stoner girlfriend. Plus they were both great together in Adventureland so it is a couple I want to see and believe. Part of the humour is that Eisenberg is such a non-action star and that same reason is why That '70s Show Topher Grace works as a big bad who barks orders and commands respect since it so against type. I just assume the big final battle ends with Grace cowered in the corner and trying to keep Eisenberg distracted with a bag of Doritos. This looks like a Matthew Vaughn-style action-comedy that is pop culture obsessed, very self-aware and over-the-top violent. So of course, we have the guy who brought us Project X directing it instead.