'The Batman v Superman: Dawn of Justice' Trailer Reveals the Filmmakers May Be Aware They Went a Little Overboard in 'Man of Steel' 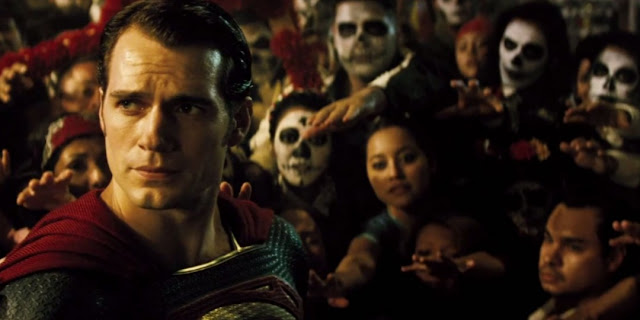 The new trailer for Batman v. Superman: Dawn of Justice that was released at the San Diego Comic-Con looks a lot better and gives me way more hope than the teaser from a few months back. It still reveals some of Zach Snyder's worst directorial instincts like shrouding everything in greys or metallic yellows that makes the movie look dark and grim with the only ounces of colours coming from the ridiculous cavalcade of explosions. At least this movie seems well aware of the wanton destruction that took place on Metropolis in Man of Steel and how Superman was responsible for the death of thousands of lives. It might be a bit of actual awareness from the director, writers, and studios that they got a little carried away the first time and rather than just try to ignore it, turn in into the central part of the storytelling with the public and the government justifiably untrusting of the alien that left behind rumble and ruin.

Good ol' Bruce Wayne seemed to going for a pleasant stroll on the tragic day and he is even less impressed with Superman's people protecting skills. I guess, Superman is rather annoyed that he no longer is the only hero that can make glowing eyes and even more annoyed the thief didn't choose a snazzy shade of red, so both now decide to rumble. Batman doubting an outsider and seeing a vigilante that is doing more harm than good is a pretty intriguing premise that promises some good dramatic tension. Tension that I trust can be pulled off by the screenwriter for Argo, Chris Terrio, even if I'm less enthused by Snyder helming again.

The big problem though is there really isn't much mystery over the outcome and I don't think there is a single person doubting that this will all end in a hearty handshake and they'll unite to take down Lex Luthor and his flowing locks. This is the problem with a studio revealing all their movies for the next million decades, because we're all well-aware the two need to be buddies for the upcoming Justice League movie. Luthor likely will emerge as the real villain in Act 3, and I do love the little sneak peeks into Jesse Eisenberg's character and he is appropriately over the top and carried a wonderful villainous charisma. It looks like he might be championing a X-Men-like law where super-powered heroes may need to be restricted or monitored, or at least that is the vibe I got with his schmoozing of Holly Hunter's Senator character (really awesome to see her and it is a pretty top notch cast.). Speaking of performances, Ben Affleck looks awesome here as a beat-down and weary Wayne that feel forced to return to the persona he thought he could abandon. Even if this movie turns out to be a mess. Affleck looks to be joining Michael Keaton and Heath Ledger as actors who disproved their doubters.

My anticipation has definitely increased here and I love the story direction that is coming along. I'm still hesitant not just because it will likely still all be super serious to the point of comedy but this looks painfully overstuffed. The Wonder Woman sequences feel like something from another movie. We still haven't seen Aquaman, Flash or Cyborg. I really don't think they have a place in this story other than Warner Brothers wants to cram in as many characters as possible to hype up the upcoming Justice League. Hopefully, the hype scenes are kept to a minimum and the story is given proper time to breathe in-between all the explosions and marketing.
Batman vs. Superman: Dawn of Justice Movie Review Trailer