Executing That Bastard Before It Can Do Damage 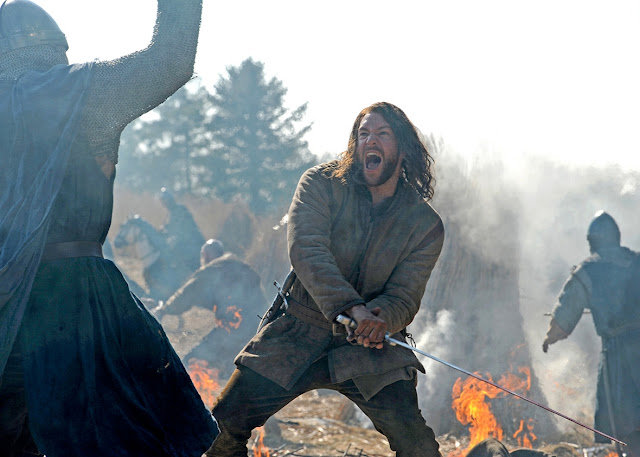 My plan is to do a hefty amount of reviews for the TV Fall Premiere season to test my theory that pieces about shows draw in greater traffic than movies. I had intended to write quickie reviews for Late Show with Stephen Colbert, Best Time Ever with Neil Patrick Harris, and The Bastard Executioner, which are all patiently waiting on my PVR. The time to watch them is dwindling because next week the insanity of the series roll outs really gets into gear plus the cinemas are now loading up with tantalizing fare that will be demanding written reviews as well. Plus there is that pesky client work and other projects, and from last I checked, I'm still a father and husband. The ax needs to be swung down for chopping and Kurt Sutter's latest foray seems the best victim. I never joined the Sons of Anarchy party and so I wanted to jump on his latest project to see what type of magic he can wield. It looks like I should keep Southpaw as the lone work from him that I've seen (a movie that I love the acting and as well the directing of the boxing scenes, but not impressed with the formulaic script he wrote).

The reviews aren't smoking hot for his story about a man seeking revenge so he creates a fake persona in order to get close to his enemies and exact revenge. It sounds eerily familiar, but it also isn't like we can't have yet another take on The Count of Monte Cristo, considering it is a classic. This also is being described as a blood soaked, sword swinging and bare skinned jumped into a heavy cloak of darkness. More specifically, an over-the-top action drama that is played super-serious and morbid. The hero just plunges thicker into self-destruction and surrounds himself with greater problems. So what seems to be the Sutter way of storytelling based off what I know about Anarchy and The Shield. I'm sure it will have its fans and I may be making a mistake bailing before even seeing the premiere, but this sounds like an atrocious chore, especially when I can get my medieval-style fix from many other places. I already got my fill of ridiculousness squeezed dry by a serious and somber tone that is tricked into thinking it is meaningful and important with dreck like The Gunman and Chappie earlier this year. I'll bail until someone slaps me around and yells at me that I'm making a big mistake.